They recall their days in Nazi Germany 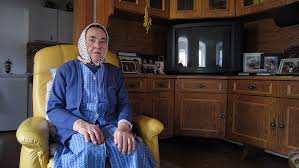 As people in their 80s and 90s, they've had plenty of time to reflect on what it was like to be young in Hitler's Germany. They've also had time to consider whether their actions, particularly those who served in the Wehrmacht or the Waffen SS, made them a party to Nazi crimes, particularly the Holocaust.
In recalling their childhoods, many talk about how they enthusiastically joined Nazi organizations for kids, graduating at 14 to the uniformed ranks of the Hitler Youth. They liked the camaraderie, the sense that they were part of something larger than themselves.
Some of the men who served in the military have become masters of moral compartmentalization. They were proud to serve the Fatherland but felt shame at what Germany did to Jews.
Many of the interviewees in director Luke Holland's documentary Final Account say they felt  powerlessness to challenge Nazi rule, unable to do anything about the crimes that some of them admit to having seen or even to have helped perpetrate.
At least one former SS man refuses to dishonor the memory of Hitler, although he says that the Jews should have been deported en masse rather than killed.
Another insists that no more than a million Jews died in the Holocaust. Six million? Never happened, he says.
Still another says that he allowed himself to be blinded to the brutal truths of the Third Reich.
The film progresses from the 1930s to the height of the war years and into the first decade of the 21st Century, inviting us to ponder the expressions on the faces we see. Is that a half-smile? If so, what does it mean? How much are those who speak allowing themselves to see?
Holland keeps his film on an even keel, punctuating interviews with images of the German countryside, historical footage (some of it in color), and views of various German concentration and death camps.
Shot mostly in 2008, Final Account represents a somber distillation of the hundreds of interviews the director conducted. Holland died last year at the age of 71. During his teen years in England, he found out that his mother was a Jewish woman forced to flee Vienna to escape the Nazis.
Final Account boasts two valuable achievements: It augments the historical record and challenges us to engage with essential questions about complicity, responsibility, and guilt.
Posted by Robert Denerstein at 10:10 AM