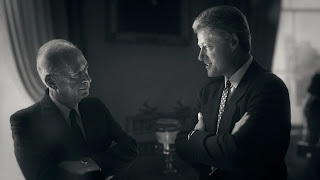 Beginning in 1991 and running through the final days of President Bill Clinton's first term, The Human Factor takes a fascinating look at diplomatic efforts to forge a peace agreement between Israelis and Palestinians. In some ways, The Human Factor qualifies as the ultimate insiders film with a variety of US diplomats revealing the moves and countermoves that created a process that ultimately failed. Israeli director Dror Moreh doesn't deal with Palestinians, although the various diplomats elaborate on Palestinian views. He focuses entirely on various US teams. Among those interviewed are Martin Indyk, a US diplomat with a self-explanatory title: US Special Envoy for Israeli-Palestinian Negotiations, a post he occupied from 2013 to 2014, and Aaron David Miller, a 24-year veteran of the State Department. The movie spends more time with Clinton's efforts than with previous attempts at peacemaking, although it charts James Baker's Middle east efforts as Secretary of State under George H.W. Bush. The movie proves invaluable for many reasons aside from demonstrating the frustrating difficulties of trying to make peace in the Middle East. It highlights the personalities of the principal players including Yasser Arafat and Yitzhak Rabin and brims with fascinating detail: Told he couldn't wear his pistol at the Rose Garden ceremony where he was to shake hands with Rabin, Arafat suggested he'd settle for an empty holster. The request was denied. The differences between Rabin, who was assassinated in 1995, and another Israeli  PM, Ehud Barak, proved particularly consequential when the talks landed at Camp David. Moreh skillfully uses photos, news footage and interviews to create a sense of intrigue even though we know that all these efforts will end in failure. Those interviewed reflect on their experiences with insight, and a fair measure of self-criticism, and The Human Factor reminds us that if negotiations are to reach anything resembling compromise, each side must be prepared to feel some serious pain. 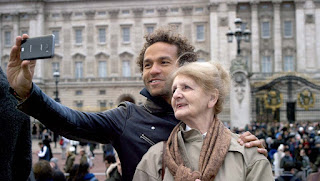 When director Sian-Pierre Regis's 75-year-old mother was laid off from a hotel housekeeping job she'd held for more than 30 years, he decided to pick up a camera and make a film. Rebecca Danigelis, who moved to the US from Britain when she was 28, survived two marriages, gave up a daughter to a sister living in England when she became too ill to care for the child, and raised two sons, one of whom suffers from schizophrenia and is still partially supported by her. Regis helps his mom become computer literate so that she can apply for jobs but also decides that after years of sacrificing, Mom deserves a reward. He begins a Kickstarter campaign to fund a year in which his mother would be able to realize her bucket list, which includes items ranging from milking a cow to visiting England for a reunion with her now-grown daughter and other family members. She also tries Hip Hop dancing and sky diving in Hawaii. Regis's concern for his mother can be affecting but Duty Free remains a limited documentary, perhaps because learning about Danigelis' often-difficult life struck me as more interesting than watching her jump out of an airplane.

Posted by Robert Denerstein at 3:49 PM