Two mysteries in an isolated town 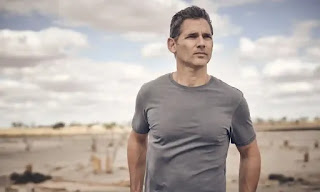 Throughout its one hour and 57-minute running time, the Australian thriller The Dry builds sustains quiet levels of tension as two mysteries rub against each other.
Set on a parched Australian landscape during a 324-day drought, The Dry focuses on Aaron Falk (Eric Bana), a Melbourne-based cop who returns to his hometown of Kiewarra after the murder/suicide of a childhood pal (Martin Dingle Wall), his wife, and young son.
The parents of the recent victim insist that Falk attend the funeral. They also ask him to hang around and investigate. They can't believe that their son would murder his family before turning a rifle on himself. An infant daughter survived the shooting.
Director Robert Connolly adapts a 2016 novel by Jane Harper, mixing present-day action with flashbacks to Falk's teen years, a time when the drowning death of 17-year-old Ellie (BeBe Bettencourt) cast suspicion on Falk.
Many of the townsfolk believe that young Falk (Joe Klocek) had something to do with Ellie's death.
Connolly does a nice job adding flavorful supporting characters,  some of whom serve as red herrings. A local cop (Keir O'Donnell) is in way over his head. Ellie's father (William Zappa) and one of her cousins (Matt Nable) seethe with hatred for Falk.
John Polson plays the genial principal of the town's school and Genevieve O'Reilly portrays Gretchen, a single mom who was part of the group of teenagers with whom Falk grew up and who now seems to spark his interest in the possibility of an adult relationship.
As if adapting to the movie's austere terrain, Bana plays an emotionally closed-in character who tries to maintain an even keel as guilt and regret roil beneath his composed surface.
Connolly ably brings the movie’s  mysteries to their conclusions and The Dry stands as an exploration of life in a town where terrible secrets lie beneath dusty, dried-out surfaces. It has been almost a year since the town saw any rain and even longer since many of its residents faced some hard truths.

Hello from Melbourne. Down here we do not call this type of rural area "outback" but "the bush" . Outback are the very remote, desert type nearly empty areas (with sometimes hundreds of miles between farms or settlements). I don't know why it always is called outback in the US. Most of inhabited rural areas are "the bush" or "regional".

Anyway, the movie is very good and portrays this type of small Australian communities well.

Thanks for the comment.. Amended review as per info. you supplied.