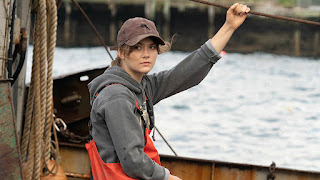 Coda skillfully blends catchy musical numbers, a variety of nicely drawn characters, and a premise that brings the conflict between family obligation and individual dreams into poignant focus.  Emilia Jones portrays Ruby,  a high school senior who lives in Gloucester, Mass. Her mother (Marlee Matlin), father (Troy Kotsur) and older brother (Daniel Durant) are deaf. As the only hearing member of her family, Ruby frequently finds herself translating sign language for her parents and brother who operate a small fishing business. Ruby loves her family, but also craves independence. She begins to find it when she joins the school’s choir and encounters an inspiring teacher (a terrific Eugenio Derbez) whose idiosyncratic ways help her to develop her talent. With a potential music scholarship in Boston looming, Ruby must decide whether to proceed with her life or remain in a role on which her family has come to rely. Jones has a nice singing voice and the rest of the characters are well played with Kotsur giving Ruby’s father plenty of ebullient personality, Kotsur and Matlin also make us understand why the family approaches the hearing world with reserve. Basing her movie on La Famille Belier, a 2014 French film, writer/director Sian Heder adds enough touches (squabbles with wholesalers who underpay the fishermen) to give the movie extra heft. At times, Coda feels corny, but Heder and a fine cast overcome all resistance. Music. Meaning and likable characters. What more could you want?Much of the dialogue is delivered in American Sign Language and presented with subtitles.