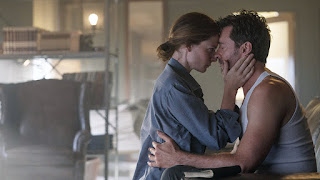 Few genres have proven as consistently intriguing as film noir. At the same time, the lingering influences of noir have created movies that display their noir trappings in such blatant fashion that they border on parody.
Sadly, that's the case with Reminiscence, a sleekly mounted mix of sci-fi and noir tropes set in a climate ravaged Miami where the streets are perpetually flooded.
Hugh Jackman stars in a story built around a gimmick. Jackman's Nick Bannister operates a business in which clients don a headset, climb into a tank, and take guided trips through their memories.
An intolerable present has created a need for escape into the past -- and clients are eager to pay for it.
Director Lisa Joy (a showrunner for HBO's Westworld) makes it seem as if Jackman is watching a movie. The memories of his clients experience are visible to him in hologram form, turning him into a voyeur who peers into other people's lives.
Thandiwe Newton plays the savvy Watts, a woman who assists Nick in his business and plays the role of devoted sidekick when the going gets rough and violent -- as it must.
This being the world of noir, a femme fatal must become part of the tale. One day, Nick is about to close up shop when a customer pounds on the door. Enter Mae (Rebecca Ferguson), a woman who might as well be carrying a sign that says, "I'm beautiful and dangerous."
Nick is jolted.
So are we -- by the flagrantly cliched feeling of the moment, followed by a later scene in which Mae sings a sultry version of Where or When, a song with lyrics that mirror the movie's time-warped themes. ("It seems we stood and talked like this before.")
When Mae suddenly disappears, Nick sets out to find her, delving into her past in the bargain. His journey carries him into an underworld of drugs and shady characters and a plot that's too convoluted to engage.
Grimly obsessive as Nick, Jackman may not wish to press this one into his book of indelible memories. Ferguson seems stuck playing a type rather than a character.
Among the more colorful miscreants Nick encounters: Saint Joe (Daniel Wu),  a drug czar who hangs out in a New Orleans nightspot, and Cyrus Booth (Cliff Curtis), a corrupt cop who supplies most of the movie's menace and who participates in a big fight scene with an underwater finale.
A powerful businessman (Brett Cullen), his wife (Marina de Tavira), and creepy son (Mojean Aria) also figure into the proceedings, slimy rich types who have enough money to avoid the worst of dystopian existence.
Joy strains to create a Bladerunner vibe, but a generic quality and the lead characters to go with it prove too much to overcome.
Nick narrates the story, delivering lots of second-rate dialogue that has the ring but not the sting of noir.
"Nothing is more addictive than the past," he says at one point.
Not in this movie.
Posted by Robert Denerstein at 2:35 PM

When Nick arrives at Cyrus' hideout he sees Mae go up the stairs, follows her, then sees her sitting behind Cyrus. He says hello to her and tells her to leave. After she does, he then asks Cyrus where Mae is. We also learn later that Mae is dead at this point so how is Nick seeing Mae in this scene. If it's some kind of memory (he picks up a memory card sitting on Cyrus' table when he walks in) I can't see how that's working here.

Nick doesn't see the woman's face when he walks in and says hello initially. When he does, he sees it's not Mae.