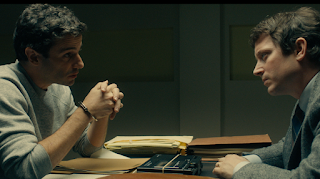 In January of 1989, 42-year-old serial killer Theodore Bundy was executed in a Florida prison, having confessed to committing 30 homicides during the 1970s. Bundy's gruesome crimes need no further description here, but as a well-spoken, clean-cut killer, Bundy secured his place in the hierarchy of monstrous American crime figures.
I'd read enough about Bundy to approach No Man of God, a drama based on death-row interviews conducted by FBI agent Bill Hagmaier, with some misgiving.  Did we really need a deep dive into the mind of a criminal who already has commanded a lot of attention?
Director Amber Sealey builds her movie around the interviews in which a sly, calculating Bundy (Luke Kirby) talks with Hagmaier (Elijah Wood).
Sealey's approach puts us in roughly the same position as Hagmaier. We’re constantly trying to evaluate Bundy as we search for clues to the question that haunts every serial-killer movie. Why did this person commit such terrible crimes?
Sealey opens the movie up a bit with news footage and breaks the claustrophobic prison mood with the late-picture introduction of an anti-capital punishment lawyer (Aleksa Palladino) who tries to stave off Bundy's execution.
According to the movie, Focus on the Family evangelist James Dobson (Christian Clemenson) took some of Hagmaier's valuable interview time to conduct a final interview with Bundy just before his execution. Bundy told Dobson that hard-core pornography played a major role in twisting his mind toward evil.
Hagmaier -- a Christian -- had no objection to Bundy's execution. He wanted to understand a serial killer. It was part of an early FBI effort to develop profiles of killers, a process depicted in Netflix’s compelling Mind Hunter series.
Kirby isn't a dead-ringer for Bundy but he captures the mercurial way Bundy shifted moods, his desire to control, and his imagined superiority over ordinary mortals. He also conveys the intelligence that Bundy brought to the job of creating the character he sometimes seems to be constructing for Hagmaier's benefit.
A youthful-looking Wood -- he's 40 -- wisely doesn't try to compete with Kirby. He makes Hagmaier a committed listener, a resolute and religious man who Bundy came to regard as a "friend."
Toward the end, Bundy agrees to take Hagmaier into the depths of his psyche. It's a powerful scene in which Kirby reveals what it was like for Bundy to commit one of his murders.
Zac Efron played Bundy in Extremely Wicked, Shockingly Evil and Vile, director Joe Berlinger's foray into Bundy's world. Unlike Berlinger, Sealey doesn't dramatize Bundy's life as a killer.
When I engage with movies such as No Man of God, I ask myself why I'm watching and why I've watched other films like it. Perhaps it's because we never seem to get a handle on serial killing and never will.
Many years ago I read an article in Newsweek in which a psychiatrist outlined shared characteristics he identified in most serial killers. He listed some, but qualified his remarks: For every serial killer's awful background, he could find someone with a worse personal history who never committed any crimes.
Bundy, of course, didn't have a horrible childhood. He insisted that he had grown up in "a fine, solid Christian home."
Maybe mystery explains the fascination. We look for answers -- and we should. None may be forthcoming but that doesn't mean we're able to turn away.
Posted by Robert Denerstein at 1:10 PM