A sad journey to Land's End 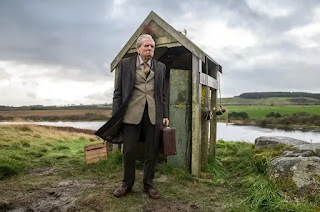 Watching Timothy Spall put one foot in front of the other as he shuffles through one situation after another ranks as one of the more painful sights of the year.
Actually, it's not Spall who's moving with so much laborious creak but Tom Harper, the aging character Spall portrays in The Last Bus, a movie that might not be the ticket for the irrevocably lonely or those dealing with recent grief. Spall externalizes Tom's internal pain and resignation in ways that represent a feat of intense characterization.
A variety of bus trips provide the story with its spine.
Here's how it works: A terminally ill widower, Tom uses his bus pass to travel from northern Scotland to Land's End at the southwestern tip of England. It's clear from the outset that Tom, shoulders slumping under the weight of illness and grief, has embarked on a heavy mission.
Most of the people Tom encounters on his journey are decent folks who try to assist him: a couple takes him in, a group of truly young people is silenced when he sings Amazing Grace.
On one of his bus rides, Tom stands up against a racist and earns the respect of his fellow passengers.
Even though he  often appears near collapse, Tom soldiers on. Sometimes, he remembers happier days with his young wife, presented in the form of flashbacks.
Tom's journey takes him to the spot where he spent the early years of his marriage and where he and his young wife experienced a terrible loss.
The Last Bus is a showcase for Spall and he makes the most of it. His performance -- reserved, quiet, and stolid -- grounds a film that, at times, drinks from a maudlin cup.
Director Gilles MacKinnon and writer Joe Ainsworth may also have wanted to paint a portrait that emphasized the decency of ordinary folks with a bit of diversity thrown in. One wishes the world were this way, although one suspects otherwise.
Spall's performance aside, it's difficult not to wish that the movie hadn't been so intent on sending poor Tom on quite so sentimental a journey.
Posted by Robert Denerstein at 3:10 PM