From Get Out to Midsommar, we've seen a variety of attempts to elevate the horror film, adding levels of meaning and creepiness to what otherwise might have been routine genre exercises. Two new films -- The Cursed and A Banquet -- try to follow suit, but neither achieves the level of seriousness that must have been intended -- and, to put in inelegantly, neither likely will scare the crap out of you either. 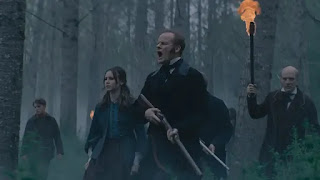 Slow-moving and mired in period trappings, The Cursed tries to marry a werewolf movie to a cautionary tale about the horrific consequences that accrue to greedy landowners who preside over a fog-shrouded rural French village during the 1800s. Landowner Seamus Laurent (Alistair Petrie) rallies a group of fellow owners to expel gypsies from their property. The gypsies, we learn, have a legal claim to some of the land but the avaricious landowners refuse to acknowledge its legitimacy. A brutal mercenary raid on the gypsy encampment unleashes a dark force embodied in a werewolf that begins terrorizing the area, leaving a string of bodies in its ravenous wake. Director Sean Ellis's lugubrious effort -- heavy on fog and candlelight -- is what you might expect if Masterpiece Theater opted for horror. Ellis serves up meticulous details and serious performances, notably from Petrie as the landlord and Boyd Holbrook as a pathologist who investigates the disappearance of the landlord's son and other horrific assaults. Though set in France, the production seems more English as the story unfolds in a 35-year flashback from a gruesome World War I sequence that opens the movie. The werewolf -- eventually seen -- appears more reptilian than furry and Ellis moves toward a fiery conclusion. The Cursed could have been improved by a quickened pace and a little more discretion in showing the werewolves. Beyond that, the story seems trapped by a Gothic seriousness that it must carry like a weight. The Cursed stands as a kind of mood piece interrupted by splashes of violence and spilled guts.
A Banquet 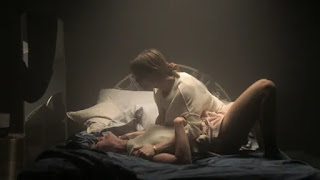 Unlike The Cursed, A Banquet sidesteps the traditions of classical horror. No werewolves or vampires stalk director Ruth Paxton's story about a teenager (Jessica Alexander) who stops eating but mysteriously loses no weight.  Wandering away from a party, Alexander's Betsey witnesses a blood-red moon and, as a result, has a transformative experience.  Suddenly, she's distant, prone to violent outbursts, and repulsed by food. Betsey's  recently widowed mother (Sienna Guillory) and her younger sister (Ruby Stokes) begin to suffer the consequences of Betsey's transformation. Lindsay Duncan plays the girls' grandmother, a practical woman who believes Betsey is putting on some kind of adolescent show. For her part, Betsey insists that something dark approaches. Mother/daughter tensions, stark interiors, feelings of isolation, and oodles of suggestion sustain interest but the movie ultimately proves more evasive than enlightening and its ending ... well ... the movie eventually ends. Many topics remain developed, including disordered eating. In short: Lots of talent on display here but staying connected to an often vague story can be a challenge.
Posted by Robert Denerstein at 1:10 PM