A silly mission to a falling moon 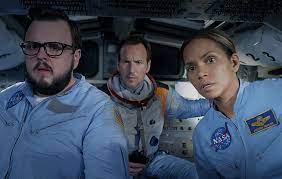 It's not easy to know where to begin writing about a movie such as Moonfall.  Director Roland Emmerich's latest helping of sci-fi offers a ragged patchwork of elements, none  particularly interesting.
To put it bluntly, Moonfall - which stars Halle Berry and Patrick Wilson -- qualifies as a poorly written, badly constructed attempt by Emmerich once again to put the Earth and all its inhabitants in grave danger.
In the age of CGI and convincing portrayals of space travel, one of the worst things you can say about a sci-fi movie is that it's too silly to be taken seriously. In Moonfall, Emmerich breaks new ground in absurdity.
The story hinges on a mammoth conceit: One day, the moon  mysteriously alters its orbit, triggering a series of earthquakes and tidal waves. Wholesale devastation begins as the moon enters a collision course with Earth.
There's little more you need to know, except that Berry and Wilson play former astronauts who wind up trying to save the world. They're helped by a brainy oddball (John Bradley) who predicted the impending catastrophe but was considered too much of a crackpot to be taken seriously.
A couple of subplots are tossed into the mix, slowing the roll of the Earth-saving mission while introducing half-hearted themes about the nobility of sacrifice.  Carolina Bartczak, Michael Pena, and Charlie Plummer appear in supporting roles in these earthbound segments.
Once a hero, Wilson's Brian Harper is a ruin of a man. Harper was blamed for the death of a fellow astronaut during a space mission. No one believed his explanation, which was tied to the movie's conspiratorial revelations.
Berry's Jo Fowler was also a part of that ill-fated mission, seen in a prologue set a decade before the main plot kicks in.
Once disaster strikes, the secondary characters flee the West Coast for Colorado. I guess the mountains are supposed to save them from destruction.
Wilson should be excused if he sometimes looks confused. Who wouldn't be with a story such as this? Berry does her best to bring conviction to every line she utters. I guess someone had to act as if any of this matters.
Why is the moon suddenly circling closer to Earth?
Turns out the moon is a hollow mega-structure that may have been created by aliens. Fowler, Harper, and Bradley's KC Houseman  eventually find themselves steering their spaceship through a hole leading to the moon's innards.
Amidst an exposition-heavy ending, the screenplay spits out themes involving artificial intelligence.
Did I mention that a lethal dark force zips through the movie in what resembles a cloud composed of lead filings. Its purpose: the destruction of biological life.
If you're a Berry fan, you may be disappointed that her character seems to fade from view as the movie reaches its conclusion, a loony attempt at something you might think of as techno-mysticism set deep inside the moon's gyroscopic interior.
Emmerich's movies (Independence Day, Godzilla, and White House Down) rely heavily on mass destruction. No surprise, then, that Moonfall offers more of the same.
Moonfall can feel like a dated helping of sci-fi, a cinematic visitor from a time when such movies didn't worry about making sense. In some hands, that might have been entertaining, but Emmerich's Moonfall proves more folly than fun.
It's not only the moon that's hollow; it's the whole damn movie.
Posted by Robert Denerstein at 4:10 PM

I really enjoyed this movie. Good effects, good cast, cameo by Donald Sutherland, and some satisfying suspense as to just which way it would all come to an end. I don't expect my science fiction to be believable - only time will tell. Another advantage, it was, to me worth my time and money, unlike The Power of the Dog, which was just ... odd.