A dress, a dream — and few surprises 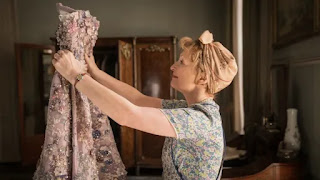 Mike Leigh veteran Lesley Manville plays a seamstress who longs to own an original Christian Dior dress in Mrs. Harris Goes to Paris. I can't quite say that I wish Mrs. Harris hadn't gone anywhere, but this adaptation of a 1958 Paul Gallico novel adds little seasoning to its comfort-food approach to cinema.
Motivated by a beautiful dress she sees in the closet of a woman for whom she cleans house, the widow Harris comes into some money, heads for Paris, attends an exclusives private showing of Dior originals, and tries to purchase one.
Mrs. Harris's objective pushes the story into class-distinction territory. No one at the house of Dior -- especially gatekeeper Mme. Colbert (a stern Isabelle Huppert) — believes that the low-born Mrs. Harris deserves to be in the same room with so much elegance.
Mrs. Harris finds a champion in the widowed Marquis de Chassagne (Lambert Wilson), an aristocrat who insists that she be allowed to watch the showing and buy whatever she chooses.
Manville has no trouble carrying the movie as an increasingly assertive woman who will not be denied, but director Anthony Fabian seldom pushes against the movie's predictable stitching.
A subplot centers on a top Dior model (Alba Baptista) who entices Dior's accountant (Andre Lucas Bravo). She reads Sartre's Being and Nothingness and insists she'd rather be studying philosophy than working as a high-class clothes horse.
Cliche? Of course. And, by the way, it’s doubtful that she could keep herself in make-up based on a philosophy student’s income.
Formula (though gently applied) doesn't stop there. Mrs. Harris not only wants a dress but becomes a feisty advocate for the working stiffs who produce Dior's fabulous clothes.
Manville works hard but the movie -- never credible to begin with -- becomes increasingly difficult to swallow as it labors to wrap things up.
Oh well, one thing remains true: It's nearly impossible to weave a first-class movie out of material that may not be threadbare but shows an awful lot of wear.
Posted by Robert Denerstein at 1:35 AM

I agree completely. I wanted to love this film but by gods, it was contrived snd cloyingly naive,

I think I have pretty high standards when it comes to movies. I'm completely fed up with CGI-driven superhero extravaganzas. I love more challenging, edgy films. But in these grim times, sometimes it seems like a little forced sentiment, however "contrived," is just what the doctor ordered. I thought "Mrs. Harris Goes to Paris" was an utterly charming, sweet movie, with an endearing performance by Lesley Manville in the title role. I found nothing NOT to like about this movie.