'Not Okay' turns out to be okay 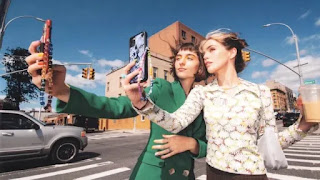 Not Okay takes aim at the ravenous need some young people have for on-line fame. It's not exactly fresh territory. We already know that hollow on-line ambition inspires shameless searches for notoriety. Besides, the selfie joke pile pretty much had been exhausted.
But director Quinn Shepherd, with help from a cast headlined by Zoey Deutsch, gets something out of an obvious premise by flooding the screen with upbeat style and maximizing her lead actress's ability to balance glibness with hints of genuine emotion.
Deutch’s Danni is an aspiring writer who works for a Manhattan-based website named Depravity.  Using rudimentary computer skills, Danni fakes a trip to Paris so that she can claim to have attended a prestigious writers' workshop. She wants to impress her boss (Negin Farsad) and maybe become a full-time writer.
Danni's timing turns out to be rotten. She posts a fake picture of herself in front of the Eiffel Tower shortly before a terrorist bombing rocks Paris. Danni now has a problem. She either must confess to never having left New York or concoct a story about the difficulties of dealing with a traumatic brush with death.
She chooses the latter course and becomes an on-line celebrity as well as leader of a movement that encourage people to admit that they've been ravaged by trauma.
Enter Rowan (Mia Isaac), a young woman who lost her sister in a school shooting and who since has become a highly recognizable  anti-gun voice. Rowan and Danni meet at a support group.
Recently seen in Don’t Make Me Go, Isaac again proves a standout. As a character who's personable but burdened by badly frayed nerves and grief, Isaac rescues the movie from its own clever striving.
Of course, Danni's bubble must burst and when it does, Shepherd  tempers the movie's playful tone.
As a movie about shallow people, Not Okay sometimes seems shallow itself. I could have done without chapter headings and other self-consciously playful ploys. And somewhere in the back of my mind, I wondered whether a comedy involving deadly terrorism might not be at odds the movie's mostly bouncy beat.
By the end, though, Shepherd leaves us with a slightly sour taste. She's right to do so. Danni's fraudulent ways teach her a lesson but, to the movie's credit, her shallow appetites are not without consequence.
Posted by Robert Denerstein at 3:35 PM