A father and daughter take to the road 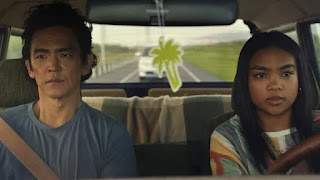 Not many films begin by telling us that we're going to like the story we're about to watch but will hate the ending. Director Hannah Marks begins Don’t Make Me Go with such a quote and it keeps us on edge. We wonder what kind of conclusion the director has in mind.
When the movie finishes, you'll either be irritated by an ending you probably didn't see coming or you’ll credit the movie for pushing against previously established comfort zones.
The story: John Cho plays a dad who learns that he has a year to live. Afraid that this teenage daughter (Mia Isaac) will be left alone, Cho's Max decides to take a road trip to search out the mother who left them both when Isaac's Wally was still an infant.
For the most part, Marks shuns what could have been lugubrious in favor of an easy-going look at the gulf that can develop between a cautious dad and a daughter who's dealing with typical teen problems, including a jerk of a boyfriend.
The movie mixes affability with heavier moments, notably when Max finally locates his ex-wife (Jen Van Epps).
Initially, he doesn’t tell Wally why he insists that she accompany him on a road trip from California with stops in New Orleans and then Florida.
A scene-stealing Isaac rules the movie, appropriate enough for a teenager who knows her own mind. She and Cho create a credible parent/teen relationship as the movie heads toward a conclusion that  sidesteps ingratiation, at least until its more reassuring epilogue.
Hey, I don't want to oversell a movie that sometimes seems slight, but Don't Make Go tries to stand-out from the pack -- and, at key moments, does just that.
Posted by Robert Denerstein at 8:35 PM