Love, thunder, and a ton of silliness 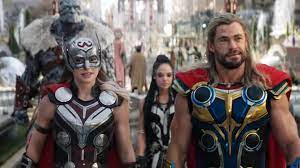 Director Taika Waititi follows his last Marvel outing, Thor: Ragnarok, with Thor: Love and Thunder and achieves pretty much the same result. That's not necessarily a bad thing.
This edition of Thor adds more winking fun to a Marvel Universe that sometimes takes itself too seriously.
Thor, of course, is a god. In case you’ve been wondering, gods do suffer. In this case, Thor (Chris Hemsworth) has been pining over a lost love, Natalie Portman's Jane Foster.
Love aside, the story wisely begins by introducing its villain, a character with one of the better marvel names, Gorr, The God Butcher (Christian Bale under a ton of prosthetics that make his head resemble a rotting hard-boiled egg.)
What's troubling Gorr? He hates the gods for not answering his prayers and saving his dying daughter. He decides that the best way to avenge himself is to kill every god.
After acquiring a magical sword that will help him destroy the gods, Gorr gets to work.
Of course,  other characters populate this shamelessly over-stuffed movie.
Although his role isn't large, Russell Crowe brings an enjoyably odd accent to the role of Zeus. I've seen the accent described as "Mediterranean." Whatever it is, Crowe gives the movie a strange, campy quality that he underscores when Zeus playfully flounces the skirt-like garment he wears under his armor.
If you judge only by the trailer, Love and Thunder isn't much to look at: Waititi and his team give Zeus's godly realm a gaudy golden grandeur and splay the story across a variety of sets ranging from low-rent to elaborate.
Tessa Thompson plays the movie's other main character, Valkyrie, a woman who runs a theme park version of Asgard, one of nine realms that ... Oh, who cares?
Only Marvel obsessives can keep track of all these characters, universes, and crossover features. I've given up even trying.
Know, though, that the Guardians of the Galaxy make an appearance in Love and Thunder. Moreover, Korg, the rock creature voiced by Waititi, appears in what amounts to an extended cameo.
In a possible bow to feminism, Portman's Jane Foster -- also known as The Mighty Thor -- wields Thor's hammer,  a task made more poignant by the fact that in her human incarnation Jane, an astrophysicist by trade, has terminal cancer.
God? Human? Human who can assume godlike qualities? Let's just say Jane goes through changes.
The movie has a mild emotional kick, but for me, it's saved by its unashamed silliness. Could we have done without it? Sure. But at least this disheveled bit of Marvel mayhem leaves you (or at least it left me) smiling.
Maybe that's because Waititi knows how to be silly without being stupid.
Posted by Robert Denerstein at 4:10 PM

To say RC adds a campy quality to this film is like saying like an ice cube adds a wintry vibe to Antarctica.