A gay romcom hits the mainstream 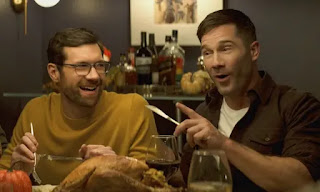 Billed as the first gay romcom released by a major studio (Universal Pictures), Bros arrives in theaters with a stamp of approval from Judd Apatow’s production company and the benefit of having been shown at the recently concluded Toronto International Film Festival.
Additionally, the movie was directed by Nicholas Stoller, who has targeted mainstream audiences with comedies such as Forgetting Sarah Marshall and The Five Year Engagement.  Stoller co-wrote the screenplay with the movie’s star Billy Eichner, a gay comic and actor known for Billy on the Street, a comedy game show that aired on cable.
I mention all this because the movie’s bona fides suggest big-time ambition. Bros apparently doesn't want to be assigned to some narrowly defined gay niche: It wants to bring everybody on board.
How you react to the movie depends, at least in part, on how you react to Eichner, who’s playing Bobby, the host of a gay podcast and the movie's main character.
Early on, Bobby is appointed as director of the nation’s first LGBTQ+ museum.  Obsessed with gay history and with its purposeful exclusion from America’s story, Bobby presents a problem common to all obsessives: He can be annoying.
Fortunately, as played by Eichner, Bobby also can be funny. He’s a walking compendium of edgy comments on pop culture, gay life, homophobia, and other subjects that make it clear that he's in the know —sometimes even about himself.
And, yes, some of the movie’s humor takes aim at gay culture. In a bar, Bobby and a friend talk about how straight people always think gay people are smart. Many actually are stupid, we're told.
Later, a major donor to the museum insists that it include an interactive gay trauma exhibit that resembles a fun house ride. Ridiculous, no?
Evidently well-versed in varieties of gayness, Eichner also gets  comic mileage making fun of gay Bro culture with its commitment to weight lifting, fitness, and ripped bodies.
Because he runs a museum, Bobby also serves as the movie’s mouthpiece for gay history, presented in breezy fashion but still saddling the story with explanatory chores that are a little too much like a lecture.
And now for the romantic part of the movie. After meeting at a club, Bobby falls for Aaron (Luke Macfarlane), an estate planner and gym rat who often relates to the world as a jock.
The rest of the movie adheres to romcom formula as the romance faces obstacles on its way toward the obligatory happy conclusion.
The gay sex scenes are no more explicit than what you'd find in most heterosexual romances, even when Stoller (Remember him? He's the director.) tries for a bit of outrageousness.
Eichner and Stoller treat a foursome as an opportunity for physical comedy, later letting us know that Bobby learned from his participation. He's looking for a more committed relationship than he initially imagined.
There's also a scene in which Bobby meets Aaron’s parents when they make a Christmas visit to Manhattan. They're upstate New Yorkers who accept their son’s gayness but remain conventional.
A second grade teacher, Aaron’s mother, decked out in a notably untrendy Christmas sweater, receives a lecture from Bobby about why her pupils should be exposed to gender diversity. She thinks they're too young.
The movie later draws mom into woke circles: She brings her young students to the museum for a tour.
Mostly Bobby and Aaron dominate the movie. The rest of the gender spectrum finds representation in the museum's staff, a smorgasbord of gender identities that results in amusing intra-staff rivalries.
I'm not the biggest fan of today's romcoms. I don't do my cinema worship at the altar of When Harry Met Sally. So you'll pardon me for not celebrating the genre as much as Bros might like.
But will Bros spark a trend of movies that might be billed as identity comedies? Who knows.
It will be interesting, though, to see how Bros fares at the box office. Movement at the turnstiles may convey a bigger message than the movie itself.
Posted by Robert Denerstein at 4:10 PM

I don't know if you saw my comment last week, but I was wondering if you'd recommend seeing this. Thanks.

Not clear why you're asking me this, Are you really debating whether ou should see the movie?

My enthusiasm for this one was restrained, although I found some it to be quite funny. That's the best I can tell you.

It sounds like it would be a mild 'yes.' Would that be about right? Thanks.