A prequel serves up horror of its own 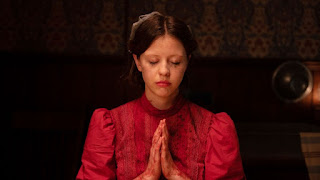 Maybe you haven't spent the last several months yearning for a prequel to the movie X, released earlier this year. Perhaps you didn't even see X, a well-regarded helping of horror about the dangers of trying to make a porn film on an isolated farm.
Director Ti West's reasonably smart film referenced horror history while serving up its own brand of chills.
Pearl takes us back to 1918 to tell us how the desiccated hag of the first movie spent her youth. Using the same settings found in X, West enhances the color of his images. He adopts an approach reminiscent of the way Todd Haynes paid homage to director Douglas Sirk in Far From Heaven. Pearl comes on like melodramatic comfort food from a bygone cinematic era.
Too much genuflecting at the altar of film history?
Maybe, but West links his work to the past and, in this case, to his previous movie.
References to other movies aside, Pearl functions well as a stand-alone effort, although it won't be everyone's idea of a scary good time. Slowly paced and evocative, Pearl uses its nostalgic allure to draw us into the increasingly weird world of its title character.
West turns Pearl into a showcase for Mia Goth, who played dual roles in the first movie and was unrecognizable as the killer crone of X.  Here, Goth meets the moment with unsettling flashes of mania and longing.
Goth's Pearl lives an emotionally and sexually undernourished life on a farm with her sternly religious mother (Tandi Wright) and paralyzed father (Mathew Sunderland).
Dressed in overalls, Pearl looks as if she might have tumbled out of Norman Rockwell painting. We know better, particularly when Pearl spears a goose with a pitchfork and feeds it an alligator or when she has enthusiastic masturbatory sex with a scarecrow.
Pearl joins a long line of insanely frustrated women. She dreams of being a star and finds encouragement from the projectionist (David Corenswet) at the town theater. He urges her to dream -- but shows her a "special" film he acquired in France, a helping of porn that underscores the theme of dreams that are smashed or even perverted.
Pearl's chance at escape arrives when a friend (Emma Jenkins-Purro) tells her that a traveling dance troupe plans to hold auditions at the town's church.
Against a backdrop of illuminated crosses, Pearl gives a knock-out performance but an eerily stoic panel of judges rejects her. They want a blonde.
What's a frustrated young woman supposed to with her husband off fighting World War? And what about those movie-inspired fantasies in which Pearl sees black-and-white images of chorus girls kicking their way to the glamorous life she believes she deserves?
The answer is obvious but still alarming. Pearl's smile --a grin that stretches her face to the breaking point -- no longer will mask the evil that festers within.
West offers gore and murder but served sparingly when compared to the butchery that sometimes dominates contemporary horror.
And despite his love for movie references, West’s approach remains idiosyncratic and he’s not afraid to take chances -- big ones. At one point, Pearl delivers a lengthy monologue, part confessional and part threat. It could have derailed the movie but Goth makes it work.
Clearly, Pearl is too twisted and weird for all viewers. But it's more accomplished than X and it allows Goth to smear the screen with blood, unleashed rage, and a killer smile -- or maybe I should say, a killer’s smile.
Posted by Robert Denerstein at 2:10 PM