It’s dressed up but where’s it going? 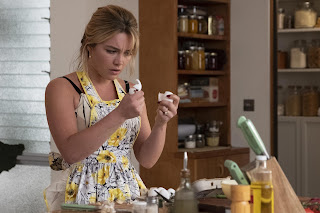 By the time I saw Don’t Worry Darling, the movie already had become the subject of an off-screen backstory involving its director and two of its stars. Consider yourself fortunate if you’ve been able to avoid reading about tensions between actress Florence Pugh and director Olivia Wilde, as well as stories about Wilde and the movie’s male lead, Harry Styles.
I’d been unable to miss the chatter but didn’t give it much thought as I watched Wilde receive a monumental assist from cinematographer Mathew Libatique whose eye-popping colors give the movie an arty glaze, like a high polish on an expensive new car.
This could be a case, though, where the movie's strengths and its weakness tend to merge. Don't Worry Darling has trouble blasting through the style that Wilde (Booksmart) brings to it and pushing beyond what we know from the outset: Composed surfaces ultimately can't conceal their cracks.
The story, if you haven’t heard, involves a group of folks who work for the vaguely defined Victory Project, a company that has created the isolated town of Victory, a retreat where employees live, dress, and act as if the 1950s had never ended.
The men head to an office — called the headquarters — while the women tend to cooking and kids, and — if Pugh's character is any indication — the crucial task of cleaning windows.
The women of this manicured world are happily oppressed; they love greeting their men with drink in hand — and more. An early scene finds Style’s Jack Chambers arriving home to perform oral sex on his wife Alice (Pugh). Styles propels his eager spouse to heights of ecstasy as she knocks dinner off the dining room table.
So goes another perfect day.
Thanks to set decorator Rachel Ferrara and production designer Katie Byron, these early scenes present the lives of a supposedly privileged few, folks who have fled the ambivalence of contemporary life, all the while reinforcing the role of men as kings of their midcentury castles.
Visually, everything is groomed to the max. Costume designer Arianne Phillips's clothes look as if they’d been purchased at a thrift store that sold nothing but items that had never been worn.
Pugh (Midsommar, Little Women, and Black Widow) already has established her credentials as an actress who can anchor a movie. She does so here, out-classing Styles with a performance of burgeoning desperation. Alice suspects that the game is rigged.
An executive named Frank (a terrific Chris Pine) hovers over the happy residents of Victory. An empathetic boss and true believer, Frank’s affirmations make him seem like the president of a fraternity, the kind of guy who  specializes in kissing the dean's ass. Of course, we know from the start that Frank can't be trusted.
Several women round out the cast. Gemma Chan plays Shelley, Frank’s loyal wife, Wilde appears as Bunny, Alice’s friend, and KiKi Layne portrays Margaret, a woman who has seen through the Victory Project illusion. Finding no exit, she leaps off a roof.
Some scenes make you wish Wilde had indulged the story in more weirdness. At a company party, for example, Frank learns that he’s about to be promoted. He's required to do a celebratory dance that makes him look like a puppet jiggling on the end of someone’s strings.
So what are we left with?
Visual jokes about the ‘50s — the men leaving home in synch as they drive what appear to be beautifully restored cars of the period — can carry a movie only so far and much rides on third-act revelations, which the screenplay handles in cursory manner that some may find a bit befuddling.
It’s possible that Wilde wants to deliver a cautionary message: The supposed time when America brimmed with security, order and middle-class comfort rested on illusion, delusion and the stifling of women.
But watching the movie I felt as if I'd been invited to a dinner at which the host had set a great table but didn't follow through with a satisfying main course.
Posted by Robert Denerstein at 11:10 AM