A movie as big as a country 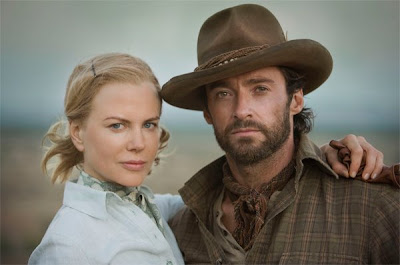 "Australia" attempts to be as big and as unruly as the country that gives the movie its name. Maybe that's why director Baz Luhrmann's sprawling epic turns out to be several movies in one.

At times, "Australia" looks like a classic western built around a cattle drive. At other times, it celebrates Australia's rich Aboriginal heritage while wagging its finger at homegrown racism. And at still other times, it goes to war, joining in the global conflagration that shifted eastward when the Japanese attacked Pearl Harbor. Luhrmann ("Moulin Rouge!," "William Shakespeare's Romeo and Juliet" and "Strictly Ballroom") tends toward bold blasts of narrative, and "Australia" certainly is no exception. Rich looking and brimming with earnest melodrama, the movie attempts to recapture the sweeping grandeur of old-time Hollywood epics. Say this, though: Luhrmann's movie refuses to be ashamed of its cliches, contrivances and obvious calculations.

I didn't mind "Australia," and I didn't love it either -- although on a couple of occasions I chuckled at the fact that it's so damn obvious. The story revolves around three central characters. Lady Sarah Ashley (Nicole Kidman) arrives in Australia to learn that her husband has been murdered; Hugh Jackman plays The Drover, an Australian cowboy who loves bringing cattle to market; and Bandon Walters portrays Nullah, a young half-caste taken under wing by Kidman's character.

Set mostly in the days prior to World War II, the movie recalls a time when mixed race Aboriginal children were taken to missions where zealous Christians hoped to "civilize" them. This scar on Australia's historical face is subject enough for any movie, but Luhrmann embeds it in a tale that touches what he presumably regards as the jagged cornerstones of the Australian experience. Nullah, by the way, narrates the movie, the first in a planned Luhrmann trilogy of big movies. (What's next? New Zealand?)

Lady Sarah, a transplanted Englishwoman, must adapt to hard country. She decides to remain in Australia, run her husband's ranch and participate in the cattle drive that's necessary to save it. A misfit crew -- led by Jackman's character -- takes 1,500 head of cattle to the port city of Darwin. All the while, King Carney (Bryan Brown) -- an aggressively greedy rancher -- plots to acquire Sarah's land. David Wenham plays Neil Fletcher, an even worse villain, a man who's more unscrupulous than King Carney.

Another archetypal character carries the burden of representing all of Aboriginal Australia. King George (Jamie Gulpilil) occupies the movie's fringe. He's Nullah's grandfather, the Aborigine who wants the boy to learn the ways of his people. King George operates in the movie like a magical figure, cropping up when needed to add a sense of mystery or to resolve a difficult situation.

Predictably, The Drover and Lady Ashley become an item -- albeit one that faces an uncertain future. She's thinking about adopting Nullah and forming a multi-ethnic family. He's a free-range kind of guy. What's left? How about World War II? The Japanese bomb Darwin harbor, and all hell breaks loose.

"Australia" clearly is an epic made possible by computers. CGI backdrops are easily detectable, as were the matte paintings of a bygone era of filmmaking, and the performances, which are scaled to play big, can be silly. This is a case where the actors can't be faulted; the movie's style encourages them to go for broke. When characters start singing "Over the Rainbow" in the middle of a rough-and-tumble epic, you know that the director has no fear of cornball sentiment.

You may find yourself amused, bemused or swept up in "Australia," possibly all three during its nearly three-hour running time. I admire Luhrmann's willingness to steer clear of nuance, to present his picture in the kind of vivid strokes that evoke memories of past moviegoing. But "Australia" proves a mixed blessing, as much a tribute to Luhrmann's eclecticism as to the magnificent country in which it takes place.
Posted by Robert Denerstein at 12:02 AM