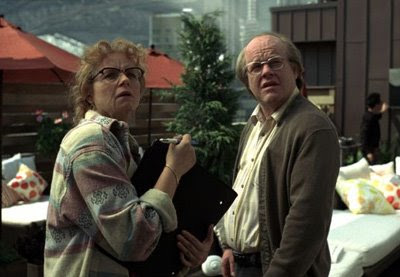 Charlie Kaufman's "Synecdoche, New York" is bound to divide audiences. I admired its creativity and marveled at the idea that a director could raise money to make a movie that spends much of its time contemplating death. Philip Seymour Hoffman -- as an upstate New York theater director -- anchors a cast that includes Catherine Keener, Michelle Williams and Samantha Morton. I talked to Kaufman during a recent visit to Denver. That interview and a review of "Synecdoche" can be found in Friday's Rocky Mountain News. Kaufman's movie certainly will have its share of detractors. If you're one of them, I'd love to hear from you. Post your thoughts. "Synecdoche," may not be everyone's night out, but it's a great movie about which to argue.

Note: I'm moderating panels at the 2008 Starz Denver Film Festival, which kicked off Thursday with a showing of Rian Johnson's "The Brothers Bloom." I'm also doing a variety of Podcasts for the festival. That means I'm a little behind in my regular moviegoing. I have, however. seen "Quantum of Solace," the latest James Bond opus starring Daniel Craig. The movie opens with a ferocious car chase around the marble quarries of Carrera. The action then moves to Siena, where Bond is involved in underground interrogation while the famed Palio di Siena -- a twice-a-year bareback horse race -- unfolds in the famed Piazza del Campo . The two parts of this sequence don't seem to have much to do with each other, we can't see much of Siena and the action consists mostly of editing so frantic, it's not always easy to tell what's happening. That's pretty much true of the entire movie.

Audiences may complain that "Synecdoche" confuses them, but probably will tolerate the latest helping of Bond chaos, even though "Quantum of Solace" isn't nearly as good as its immediate predecessor, "Casino Royale." Maybe there's a rule here: If a movie moves quickly enough, its flaws become too blurry to bother us.

A few questions, though: Is it me or is Bond starting to look and act like a psychopathic killer? Has it become impossible to find a villain with stature? This time out, Mathieu Almaric -- of "The Diving Bell and the Butterfly" -- portrays Dominic Greene, a sadistic baddie who hides his villainy behind environmental causes. Are the stakes too low for a 007? Isn't Bond supposed to keep the whole world from blowing up? Here, he's out for vengeance and to keep Bolivia from succumbing to drought, a noble task but one that seems better suited to the Peace Corps than to the world's most able secret agent.

"Quantum of Solace" offers the pleasures of scale. And one could argue that we've seen so many Bond movies that we're able to tolerate the kind of directorial shorthand that director Marc Forster ("The Kite Runner" and "Stranger Than Fiction") consistently employs. And, yes, there still are beautiful women to ogle, most notably Olga Kurylenko, who winds up accompanying Bond as he hurtles toward the movie's finale.

Something's off, though. This Bond seems less like the world's manliest man than someone who has had so much beaten out of him, there's not much left beyond perpetual disappointment and simmering rage. Craig's Bond has been re-tooled for a bruising, cynical moment in which adrenalin and instinct trump wit and savoir faire. That may be metaphorically apt, but it's not exactly fun to watch. Put another way, would you want to have a martini with this guy or would you be more likely to move a couple of bar stools away?
Posted by Robert Denerstein at 12:01 AM