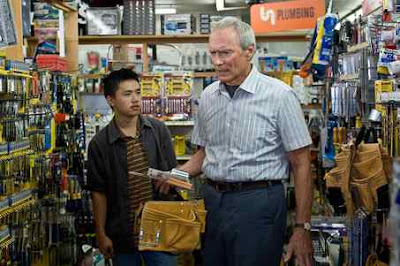 I admit it. I don't get it. The praise -- immoderate and enthusiastic -- that has been heaped on Clint Eastwood's "Gran Torino" has me scratching my head.

Because Eastwood both stars in and directed "Gran Torino," the movie has been hailed as a kind of valedictory for the iron-faced icon, who's now 78. As Walt Kowalski, retired autoworker and recent widower, Eastwood creates an unlikely mind meld between Dirty Harry and Archie Bunker. Kowalski, an unapologetic racist, spews slurs at his Hmong neighbors, people who hail from South East Asia and who moved to the U.S. after the Vietnam War. They were on our side, but that's not enough to deliver them from Walt's wrath.

But no movie -- even one made by someone who's unafraid of political incorrectness - can linger inside Walt's racist attitudes for its entirety. Nick Schenk's script eventually allows Walt to explore his bigotry and his violent tendencies, and "Gran Torinio" turns into one more Eastwood movie that insists on examining the consequences of violence. Many will view the movie (and perhaps rightly so) as another big-screen atonement for an early career in which Eastwood played brutal characters such as The Man With No Name. In those days, Eastwood wasn't so much an actor as he was a collection of tics and sneers. That's still true, but age has put some real weight behind those tics and sneers. Enough already. We get it. Violence is bad for the soul.

The story, which is set in Detroit, focuses on the relationship between Walt and two of his neighbors, an insecure young man (Bee Vang) and his sister (Ahney Her). Hmong gang members are doing their best to recruit Van's Thao. As part of his initiation they order him to steal Walt's cherished 1972 Gran Torino, which has been kept in mint condition. After the robbery goes wrong, Thao develops a relationship with the reluctant Walt, who's slow to drop his racism and even less interested in listening to the baby-faced local priest (Christopher Carley) who urges him toward confession.

Eastwood delivers certain kinds of lines with more venom than anyone else. "Get off my lawn," he warns a group of Hmong toughs, aiming a rifle at them and threatening to blow them to smithereens. But some of Walt's targets are too easy. After all, how much gumption does it take for a man with Dirty Harry's sarcasm to go toe-to-toe with a priest who looks young enough to have just graduated from high school. And the movie feels totally predictable when Walt confronts a group of young black men who are threatening Her's character. Walt does everything to intimidate them but tell them to go ahead and make his day.

Eastwood being tough always has some kick, but this kind of movie wields a double-edged sword. Those who will find Walt's racism amusing are given a free pass to yuck it up as he calls his Hmong neighbors gooks and slopes. (Why they're so good-natured about these slurs is beyond me.) At the same time, the movie goes to great pains to make sure that we know it doesn't share Walt's views and even forces Walt to admit that he might be wrong about a few things. At one point, he says he feels closer to his earnest Hmong neighbors than to either of his two sons.

"Gran Torino" no doubt will connect with audiences, but I'd rank it low on the Eastwood totem poll, a bland-looking and not entirely credible effort when compared with Eastwood masterpieces such as "Mystic River." Make no mistake; I've been an Eastwood fan since the Dirty Harry days and before. I don't need another lecture, though, on the awful, soul-shattering consequences of violence -- not from a movie with more than its share of sitcom dialogue.

In one scene, Walt takes young Thao to meet the local barber (John Carrol Lynch). He wants to teach the boy how to interact with men -- by which he means white ethnic men. Walt and the Barber trade ethic slurs in a gruff but supposedly good-natured way. This scene -- perhaps intended as the movie's funniest -- seemed so self-consciously concocted that I wondered why Eastwood, a man whose movie taste can be impeccable, didn't hide it under a rock.
Posted by Robert Denerstein at 6:00 PM