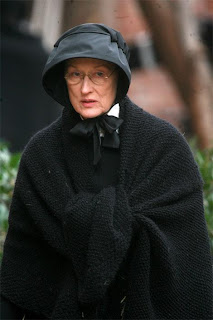 I grew up with lots of kids who attended Catholic schools. Sometimes, we'd play basketball in the playground that adjoined the Epiphany Church school, where my pals learned the so-called four Rs -- reading, writing, arithmetic and, of course, religion. I'd occasionally see nuns scurrying off after the final bell had rung. From friends who attended the school, I knew a few nuns by reputation. I'd heard stories about knuckles rapped with rulers. To me, the nuns seemed to divide into two general categories, those who looked sweet and those who looked fierce. It wasn't always easy to tell which nun fell into which category because they all wore habits that tended to obscure personal identity, and, to tell you the truth, I was glad I only had to observe these cloistered women from afar.

Both kinds of nuns-- sweet and sour -- are reperesented in John Patrick Shanley's "Doubt," a movie set largely in a Catholic school in the Bronx and which obtains mixed results by mingling telling details of a 1960s parochial school experience with deep philosophical questions about the nature of certainty.

Meryl Streep, sporting another pronounced accent, plays Sister Aloysius, the school's principal. Sister Aloysius is the kind of nun who slaps kids on the back of the head if they're caught dozing during mass. She wants the kids to fear her. To that end, she has learned all the tricks that ensure that they will. She encourages a younger teacher to hang a picture of the pope just above the blackboard. When the younger teacher asks why, Sister Aloysius explains that it will enable this newbie nun to see her charges reflected in the glass while she's writing on the board. That way, says Sister Aloysius, the kids will think you have eyes in the back of your head. To sister Aloysius, the ballpoint pen is tantamount to an instrument of the devil, something that signals a diabolical decline in penmanship. She views "Frosty the Snowman" as an abomination because it encourages a belief in magic. Snowmen, as we all know, do not really come to life.

The younger and sweeter teacher (Amy Adams) is called Sister James. She has entered the church during a time of change, and she's softer and easier on the kids. She's too young to be suspicious of her charges, and as Adams portrays her, she's a woman who occasionally tempers her naivete with displays of conviction.

There's lots of well-observed detail in Shanley's adaptation of his own play, but Shanley, who also directed, has big thematic fish to fry and he's not especially interested in writing a memory play about his Catholic youth. Instead, he raises tough questions that show how difficult it can be to discover anything resembling absolute truth. To do this end, he introduces another character, Father Flynn (Philip Seymour Hoffman).

As a result of a series of vaguely apprehended events, Sister Aloysius begins to suspect that Father Flynn is molesting the young man (Joseph Foster II) who happens to be the school's first and only black student. For his part, Father Flynn knows that the winds of change are starting to blow, and he's interested in establishing what he views as a more welcoming environment within the Church. At the same time, he's seen with older priests, laughing and enjoying a dinner, clearly at home in the Church's old-boy network.

At best, the evidence against Father Flynn is shaky, and he insists on his innocence. Sister Aloysius doesn't buy it; she wants to get Father Flynn away from the children, and she works at her goal with wily persistence.

Shanley, of course, doesn't want to answer the most obvious question: Did Father Flynn molest the boy? Instead, he creates ambiguity around key plot points and even goes so far as to reveal that the boy in question already has developed homosexual tendencies. In one of the movie's pivotal scenes, Streep meets with the boy's mother (Viola Davis), who (quite surprisingly) wants the boy to remain in the school no matter what. Davis' performance has been singled out in many reviews, and she's likely to find herself nominated for a best supporting actress Oscar.

The boy in question becomes a pawn in Shanley's theatrical game, a drama centering on Streep, Hoffman and Adams. Streep's performance tends toward the showy, but she also reveals the caring side of Sister Aloysius, who can be hell on students, but who seems solicitous and even tender with the school's older nuns. Adams' Sister James has a more compassionate approach to Flynn. The movie's title tips us to the possibility that Shanley wants to wag his finger at those who insist that their points of view -- and only their points of view -- are right. He then makes that point echo through the hallways of an institution where discipline often seems to trump inquiry. 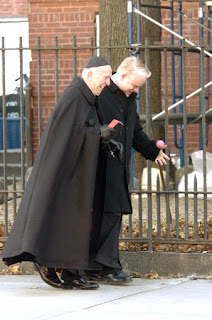 Shanley may wish to oppose two kinds of child abuse, one that is sexual and direct; the other draconian and far less apparent, a rigid suppression of individuality. Many scenarios are possible. Suppose, for example, Father Flynn is gay, but refuses to act on his sexual impulses. Suppose that he identifies with his young charge and with the suffering that comes from being a gay person in a difficult environment. Suppose that this is the extent of his "crime," feeling a special bond with a boy he never abused physically. Suppose that Father Flynn is deeply (and justifiably) upset by the way children at the school are bullied by a principal who refuses to see her charges as anything but potentially rebellious spirits who must be controlled.

That kind of discussion helps make "Doubt" a worthy and absorbing enterprise, but I couldn't help wondering whether Father Flynn was a pedophile. Maybe I'm being too literal here. I understand that there are matters about which I (and no one else) ever can be entirely certain. Criminal abuse of children may not be one of them. For me, that weakens Shanley's movie, though not beyond redemption. 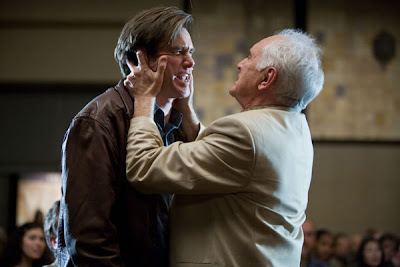 For a time, Jim Carrey seemed to rule the box-office world of comedy. Now comes, "Yes Man," Carrey's latest, which arrives this Christmas with all the urgency of an afterthought. At times, "Yes Man" is cute. At times, it offers chuckles. At no time does it seem fall down funny. Mostly, it's forgettable. Carrey plays Carl Allen, a bank loan officer who fills his life with negative responses to just about everything. One day a friend coerces him into attending a seminar given by a self-help guru (Terrence Stamp) who advises devotees to say "yes" to anything that crops up in their meager lives. Carrey's Allen follows this ridiculous prescription of ascent, which leads him into a variety of comic adventures. He also finds love with a flaky singer and amateur photographer (Zooey Deschanel) who responds to his devil-may-care attitude. Given all the serious movies that are lighting up Hollywood's tree this year, "Yes Man" might just click with audiences, but it's pretty much a one-joke affair that even the rubber-faced Carrey can't stretch into something robust and rewarding.
Posted by Robert Denerstein at 6:00 PM