'B' movies just keep getting bigger 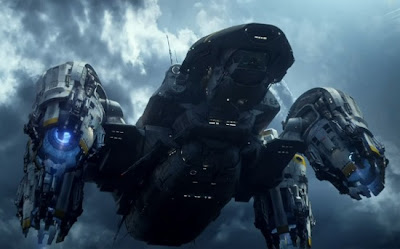 At the age of 74, director Ridley Scott has gone back to the turf he so ably mined with 1979's Alien. Alien, of course, spawned a franchise that included entrees by such important directors as James Cameron (Aliens) and David Fincher (Aliens 3).

Scott's initial movie, which has stood the test of time, caught moviegoers by surprise with its high-voltage suspense, terrifying creatures and cynicism about what might happen if humans encountered alien life forms. Alien arrived in theaters as a welcome antidote to the awed optimism epitomized by movies such as Steven Spielberg's Close Encounters of the Third Kind (1977).

In the world Scott created, space no longer represented a final frontier where mankind might find salvation, but a lonely expanse filled with unrelenting terror.

Although Prometheus marks Scott's return to outer space, it can't steal the fire of cultural relevance that marked the director's initial attempt to shed Earth's gravitational pull. Prometheus makes use of lots of spiffy new technology -- notably the improved 3-D that seems to have become a mandatory part of every summer movie -- but the movie feels as much like an embellishment of recognizable themes as a bold journey of discovery.

Scott has applied a taste for the monumental to a lurid B-movie, sci-fi scenario about a voyage to a distant planet, and for a time, it works. But when the crew faces its predictable eve of destruction, vague aromas of familiarity begin to waft over the proceedings. 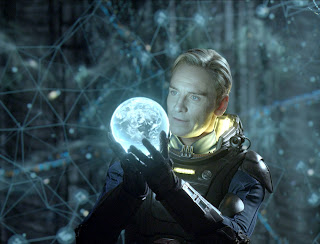 It's telling that Prometheus's collection of characters includes only one real standout and that this most memorable of characters is a robot played by Michael Fassbender, an actor whose lightly expressed sardonic wit can be as subtle as one of his character's raised eyebrows. Fassbender's David is a humanoid variation of 2001's HAL, a machine that develops its human style by watching Peter O'Toole in Lawrence of Arabia. Nice touch.

Those who see Prometheus will not enter an idea-free zone. I have mixed feelings about whether that's a good thing. The screenplay tries to pit creationism against Darwinism and then stand both of them on their heads, but the movie's "serious" talk doesn't always synch with the expected and often well-delivered shocks.

The greatest of these jolts occurs during an automated operation undergone by Dr. Elizabeth Shaw, played by Noomi Rapace, still best known for her work in the Swedish Girl With the Dragon Tattoo trilogy. I'll say no more about this bit of surgery, but it's probably destined to become the movie's most talked about scene.

Dr. Shaw, who wears a neckless from which a cross dangles, subscribes to the notion of a created universe. Her faith-based position contrasts with her lover Dr. Charlie Halloway (Logan Marshalll-Green), a staunch Darwinian.

Both Shaw and Halloway are participants in a mission prompted by their early-picture discovery of cave drawings that suggest that an alien life form may have had something to do with the origin of life on Earth. When the movie heads into space, we learn that the mission has been taken over by a corporation whose on-board rep (Charlize Theron) is an ice princess and the movie's resident bitch. The vessel's captain (Idris Elba) is a hard-boiled guy who who tends not to focus on big questions.

As the story progresses, Rapace's performance becomes increasingly focused, a display of ferocious determination. And, of course, a variety of lesser characters become fodder for many hideous-looking monsters that seem to have been designed to ensure that the movie fulfills its obligations as a summer slimefest.

With a couple of amazing exceptions, Scott's use of 3-D proves less than spectacular and some of the movie's visual creations -- an alien spaceship that looks like a giant bagel from which someone has taken a healthy bite -- are more impressive for their size than for their imaginative design.

During the movie's stunning prologue, I scribbled a note to myself; I wondered whether Scott had begun so amazingly that nothing in the rest of his movie could live up to what transpires during the opening credits. I was sort of right about that, although Scott can't be faulted for not adding enough bells and whistles. If you sit through the closing credits, you'll discover that Prometheus's technical crew takes up nearly as much space as half the London phone book.

Should you see Prometheus? I certainly wouldn't try to talk you out of it. Prometheus is a decent helping of sci-fi that's probably a shade more intelligent than most of what we'll see this summer, but ... and this is a major "but" -- it is not the knock-out for which I had been hoping, and as a colleague eloquently expressed after the movie, Prometheus , which eventually does become a kind of prequel to Alien, diminishes in the mind the more the furor around it subsides.