Romance at the end of the world

Steve Carell and Keira Knightley eventually create some chemistry on the road to oblivion. 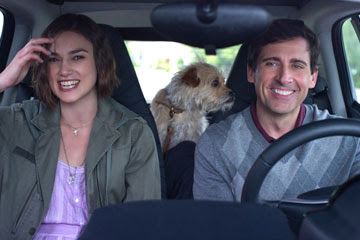 Do filmmakers know something we don't? I ask this because of late we've seen several end-of-the-world films. Lars von Trier's Melancholia and Abel Ferrara's 4:44 Last Day on Earth top the most recent list. Before that, we saw a big-screen adaptation of Cormack McCarthy's post-apocalyptic novel, The Road, and long before that On the Beach, director Stanley Kramer's earnest 1959 cautionary tale about the dangers of nuclear warfare.

Genre fans can make their own lists, but one thing's clear: Hollywood has an on-again, off-again love affair with the demise of absolutely everything.

Now comes Seeking a Friend For the End of the World, a tonally addled movie that can't seem to decide whether it's a biting black comedy, an offbeat romantic comedy or a drama about the virtues of reconciliation and love. Seeking a Friend, which stars Steve Carell and Keira Knightley, winds up being all of those things and none of them, a curious hybrid of a movie that never quite finds a believable niche.

In the early going, Seeking a Friend threatens to ignite a spark of genius. Carell plays Dodge, an insurance agent. For Dodge, the approaching Doomsday feels like a form of cosmic piling-on. Dodge's wife has decided to leave him rather than spend her last days in his company. He has no luck finding solace among his friends, either. They all seem to have taken to shooting heroin and indulging their libidos.

Alone and depressed, Dodge eventually is thrown into contact with a flighty young neighbor with an affinity for vinyl records (Knightley's Penny) and the boyfriend (Adam Brody) that the script quickly sheds. At that point, first-time director Lorene Scafaria holsters most of her satirical guns and tries on a variety of road movie ploys.

Dodge and Penny flee a riot-plagued New York City, he in hopes of contacting an old high-school girlfriend, she because Dodge promises to help locate a pilot who'll be willing to fly her to Britain to spend her last days with her family.

Along the way, our mismatched couple runs into William Petersen (as a man who has hired someone to assassinate him so that he at least won't know when the end is coming) and Derek Luke (as a former boyfriend of Penny, a survivalist who thinks he can out-macho the apocalypse).

If there's a comic high point in Dodge and Penny's road-warrior adventures, it arrives when they stop at Friendsy's, a restaurant where a giddy staff has become helpful in a nearly berserk sort of way that parodies a variety of well-known eateries.

But Seeking a Friend lacks the fortitude to laugh all the way to oblivion.

Late in the proceedings, Dodge takes Penny to meet his father (Martin Sheen), a man he hasn't seen in years. As fortune and script contrivance would have it, Sheen's Frank is a pilot with his own plane. But before any trans-Atlantic travel can be discussed, Dodge must vent a bit about the father who left home when he was still a kid, and Sheen must slip into apologetic mode.

As the depressive Dodge, Carell can be a little bland, and Knightley works her character's eccentricity as hard as she can, but Carell and Knightley deserve credit for increasing their chemistry quotient as the movie progresses.

Seeking a Friend for the End of the World has its comic moments and also a few that prove touching, but here's another movie that asks us to chew on scraps of satisfaction rather than savor an entire meal. Moreover, the movie's lachrymose undertow doesn't always make it easy to take.

And what's up with all these end-of-the-world fantasies anyway? There's an almost sickening indulgence to these movies as if an aging baby-boom generation can't imagine that life will go on without it. As I dipped in and out of the various moods of Seeking a Friend, I began to miss the uncompromising satire of bravura end-of-the world movies such as Dr. Strangelove.

In that classic, we were stupid enough to destroy ourselves. These days we seem content to fantasize about the end of a bland run caused by some sort of cosmic collision which feels more like the cancellation of a forgettable TV series than the apocalyptic conclusion of ... well ... everything.

Oh well, there's one truly great thing about end-of-the-world movies. No matter how much we might crave second helpings, they don't allow for sequels.