Three characters search for ... well ... something in Your Sister's Sister, an engaging indie. 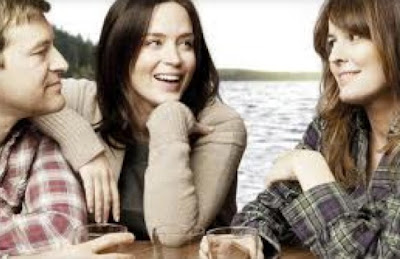 Going in I was leery. Your Sister's Sister has all the trappings of the kind of small-stakes indie movies that have been glutting the art market of late. My attitude was formed in part by the movie's bona fides: Your Sister's Sister was directed by Lynn Shelton, who previously directed the painfully contrived indie comedy Humpday, and it includes a performance by indie regular Mark Duplass. Credited as the movie's executive producer, Duplass -- who comes out of the so-called mumblecore movement -- was last seen in the indie romance Safety Not Guaranteed, which arrived fully stocked with the usual array of unhinged characters.

Your Sister's Sister does share a kinship with some of its indie counterparts: Duplass's character, for example, seems stuck in an all-too-typical directionless limbo. But Your Sister's Sister goes against the grain of expectation to become an involving character study built around complex emotional entanglements.

And instead of being annoyed by these characters, we're often engaged by them -- at least, I was.

After a less-than-gracious speech at a memorial service for his late brother, Duplass's Jack is invited to spend a weekend at a cabin owned by the family of the late brother's former girlfriend. Said girlfriend (Emily Blunt) -- Iris by name -- thinks Jack needs a little time alone

When Jack arrives at this cabin on the Washington coast, he quickly learns that he's not going to be alone. Hannah (Rachel DeWitt), a lesbian, a vegan and Iris's half-sister, already has sought the solitude of the cabin to recover from the dissolution of a long-term relationship.

After an awkward start, Jack and Hannah spend the night sitting around the kitchen table, talking and downing tequila shots. They wind up in bed together, less driven by passion than by a bit of alcohol-induced experimental daring.

To further thicken the story's stew, Iris shows up the next day. She, too, was unaware that Hannah had been conducting her own emotional retreat at the cabin, but she's happy to see her sister and ready to pursue her as-yet-unexpressed feelings for Jack.

Being cooped up with three characters in a cabin can be disastrous, but the actors know how to win us over, as Jack and Hannah struggle to decide whether to tell Iris about their fling.

If I had to pick one actor of the trio as the movie's stand-out, I'd opt for DeWitt, who's smart, vulnerable and attractive as Hannah, a woman with a trick or two up her vegan sleeve. Blunt is winning as an equally vulnerable young woman, and Duplass is amusing in the self-consciously smart way we expect from a bright young man who has yet to figure out much of anything.


Posted by Robert Denerstein at 11:15 AM