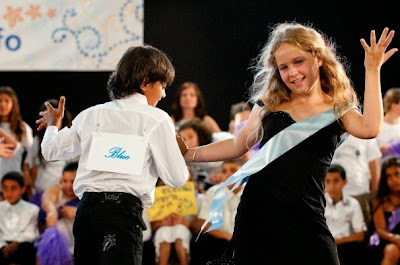 I don't know what could be more naive than the idea that teaching ballroom dancing to Israeli and Palestinian children might help create a climate in which a peace could grow.

The documentary Dancing in Jaffa tells the story of Dulaine's efforts. He left Jaffa, Israel, as a child and returned many years later as a ballroom-dancing enthusiast who believes that teaching kids to dance could be the start of something bigger -- both in terms of establishing long-term peace prospects and building children's self-esteem.

Dulaine hopes that by dancing with one another, Palestinian and Israeli children will drop some of their mutual suspicions -- or at least explore them.

A difficult task is made even more problematic by the fact that some of the Palestinians (those who are Muslims) aren't supposed to touch members of the opposite sex and by the fact that most of Jaffa's schools don't have mixed populations of Arabs and Israelis.

Dulaine seems to believe that the best antidote for all political and ethnic recalcitrance is silliness, and he applies lots of it in trying to get kids to respond to his entreaties.

Director Hilla Medalia is smart enough to allow the tensions of life in Israel to invade her film: protests by right-wing Israelis are seen, and we also learn about the difference in the way Palestinians and Israelis treat Israel's independence day.

An Arab teacher explains to her charges that for Arabs, the day marking Israeli independence commemorates a "great catastrophe."

As with most documentaries about kids, the young people make the film, particularly a shy Arab girl named Noor who blossoms under Dulaine's tutelage and a Jewish girl named Lois, who isn't shy about crossing lines.

I don't suppose that Dulaine, who was born to an Irish father and a Palestinian mother, believes that he single-handedly can bring about lasting change, and peace certainly doesn't seem to be at hand. But these kids make you hope that someone will be able to give them the secure environment they deserve.