A shortage of suspense cripples 'Allied' 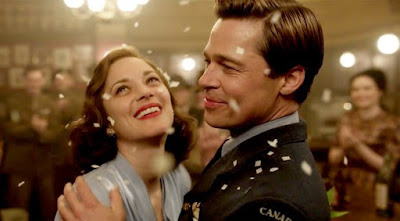 Working from a screenplay by the usually spot-on Steven Knight (Dirty Pretty Things, Locke), Zemeckis creates a star-driven vehicle that relies on the charisma and attractiveness of Brad Pitt and Marion Cotillard.

That and lots of spiffy looking vintage cars of the 1940s.

This approach might have worked had Zemeckis not been saddled with two mismatched performances. Opting for restraint, Pitt comes off as detached and wooden. Cotillard shows more life, but the two actors are unable to create a duet that burns its way into Hollywood's pantheon of great romances.

Beginning in Casablanca (a bow to another movie about a war-torn romance), Allied throws Pitt's Max Vatan into contact with another undercover operative, Cotillard's Marianne Beausejour.

The two are supposed to pose as husband and wife so that they can attend a party at which a Nazi ambassador will be assassinated. So far, so good.

In a car in the desert -- in the middle of swirling sandstorm no less -- Max and Marianne have sex. What was supposed to be sham marriage turns real.

We expect trouble because the movie contains plenty of early dialogue in which Max warns about the dangers of emotional involvement in operations that require a high degree of focus.

The post-assassination story shifts to London, where Max and Marianne have taken up residence. A year after Casablanca, Marianne gives birth to a baby girl during a German blitz of London, perhaps setting a new standard for what it means to have a war baby.

Allied adds twists, but marches along without generating the requisite ripples of intrigue. I'd tell you more, but I'm going to avoid spoilers.

If you see Allied, think of what a director such as Alfred Hitchcock might have done with a similar scenario. Actually, you don't have to think about it: You can watch Hitchcock's Notorious.

No fair telling more, but know that Allied's inability to spring to vivid life makes you wonder whether this kind of old-fashioned romance hasn't been milked dry.

Zemeckis (Flight and The Walk) is known for his ingenious use of special effects, but he might be off his game in this often low-key effort.

I can't say I believed a minute of Allied, but from its captivating opening shot (Pitt parachuting into the desert) to its misguided sentimental epilogue (I won't say more), the well-crafted Allied is dressed for a success it never really achieves.