Twists and eroticism in this thriller

In the Handmaiden, director Park Chan-wook keeps us guessing about who's being conned. 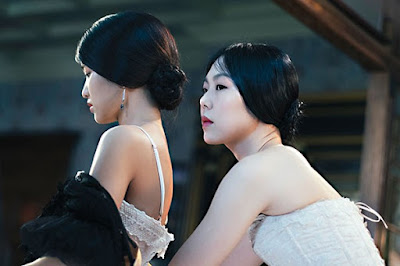 If you're familiar with the work of Park Chan-wook, the South Korean director of movies such as Sympathy for Mr. Vengeance, Oldboy and Lady Vengeance, you already know that perverse breezes waft through Park's work in ways that spur his considerable and often bizarre powers of invention.

At first blush, Park's latest -- The Handmaiden -- seems like the director's most conventional work to date, an elegant period piece set in Korea during the 1930s. Don't be fooled, treachery looms.

The story begins when a young woman named Sook-hee (Kim Tae-ri) becomes a maid for Lady Hideko (Kim Min-hee), a woman whose strangely tormented upbringing rises to the surface as the movie's three-part, time-bending structure unfolds.

Enter Count Fujiwara (Ha Jung-woo), a Korean con man. Korea was under Japanese rule in the 1930s, so it paid for Fujiwara to take a Japanese name and pose as a nobleman.

Fujiwara, who's after Lady Hideko's inheritance, makes Sook-hee a player in his attempted con. He wants to marry Lady Hideko.

Park divides the movie into three sections, each allowing us to understand more about the story as it's told from varying points of view.

Twist upon twist unfolds as Park keeps us off guard about who's conning whom.

Eventually, Park adds the expected violent flourishes, and, by the end, he tempers the movie's real perversity -- the way the characters attempt to exploit one another -- with as sweet a love story as a director such as Park can muster.

Despite the movie's often beautiful images and Park's deliberate pacing: The Handmaiden can't conceal the director's preoccupation with vengeance, lust, perversion and all around weirdness. Did I mention romance? Yes, that, too.

You're right to think that such disparate elements should be slamming against one another with all the grace of colliding garbage can lids. But Park's ability to fit conflicting ingredients into the movie's overall design results in a sly, seamless and exceptionally accomplished piece of work.