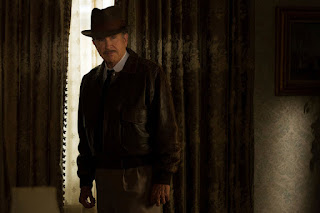 Friday morning's Hollywood Reporter offered the paper's box-office predictions for the Thanksgiving weekend. Not surprisingly, Moana, the animated feature from Disney, was leading a small pack of new releases. The Hollywood Reporter headline went on to note that Warren Beatty's Rules Don't Apply had bombed. Rules, the Reporter said, might earn $2 million from 2,382 runs for five days, that after grossing what the paper called a "scant" $285,000 on Thursday.

I don't particularly care about box-office receipts nor do I equate such numbers with artistic success, but the headline left me feeling a little sad because it felt like an era might have ended.

Beatty, who made his big-screen debut in 1961's Splendor in the Grass, hasn't been involved in a ton of movies, but he nonetheless epitomizes a certain kind of stardom, some of it having to do with his reputation as one of Hollywood's most prolific lovers. That was then. Beatty has been married to actress Annette Bening for 24 years. They have four children.

Scheduling conflicts forced me to miss screenings of Rules Don't Apply, which Beatty directed. The screenplay is credited to Beatty and writer Bo Goldman, whose work includes One Flew Over the Cuckoo's Nest (1975), Melvin and Howard (1980), Shoot the Moon (1982), and Scent of a Woman (1992).

I finally caught up with the movie, although some of my anticipation had been dampened by the generally unenthusiastic reviews that greeted the movie last Wednesday.

I don't know if Beatty has given us a glimpse of the real Howard Hughes, but he certainly has assembled a strangely engaging performance as a reclusive egotist and world-class eccentric.

Beatty also can be very funny as a tycoon who hems and haws as his mind leaps from one task to another. As he anticipates his next move, Hughes seems to give the present moment only half of his attention.

Is Hughes crazy or canny? Some of the movie involves Hughes's struggle to retain ownership of TWA airlines and to protect himself from charges that he'd lost his mind.

Hughes's indifference to others comes across in almost benign fashion: He can seem so entirely oblivious to the effect he's having on others; his cruelty can seem almost inadvertent.

But the movie isn't only about Howard Hughes. It also focuses on an aspiring starlet (Lily Collins) who arrives in Hollywood with her religious mother (Annette Bening). Collins's Marla Mabrey has been summoned by Hughes for a screen test. A devout Baptist, Marla's golly-gee world view couldn't be further from Hughes's. Hughes's chauffeur (Alden Ehrenreich) becomes Marla's guide through a Hollywood wonderland -- although she seems determined enough not need anyone's help.

Matthew Broderick portrays Hughes's main attendant, a loyal fellow who works to fulfill Hughes's wishes -- which can shift within a matter of seconds. Banana nut ice cream, bought in great quantities, becomes an obsession -- until suddenly it's not.

Ehrenreich's Frank sticks with Hughes, partly because he's hoping Hughes will back him in a real estate venture and partly because he falls for Marla. Hughes forbids his employees from having relationships with his aspiring starlets.

Of course, the rules don't apply to Hughes: He takes advantage of innocent young Marla, although without much by way of malice and foresight. And of course, the he turns his employees into toadies whom he routinely humiliates.

The movie includes a variety of small performances from such notables as Alec Baldwin, Candice Bergen, Martin Sheen and Ed Harris, but none of them really matter.

So what to conclude about Rules Don't Apply? Well, I'd see it for Beatty's performance, which might qualify as one of the great screen curiosities, revealing while simultaneously being shrouded in shadows of secrecy.

I certainly understand why many have called Rules Don't Apply a flop, but if you want to see what Beatty has done with Hughes's story, you may not care. Fair to say that Rules Don't Apply is not of this moment, but it may not be of any other moment, either.

At its best, the movie has a nutty, absurdist quality that suggests that the only mistake greater than participating in business and entertainment -- or the business of entertainment -- would be to take much about it at face value.