A Russian movie shows post-war devastation. That may not sound like fun, but Beanpole should be seen. 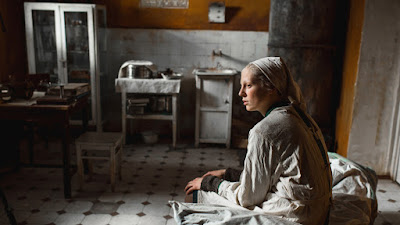 When Americans think of the end of World War II, we often see a country buoyed by victorious elation, a precursor moment to the boom years that followed.

The experience in Russia was quite different. Partly because much of the war was fought on Russian soil, the country's devastation was far greater than anything that America experienced.

We get a stark picture of just how bad things were in director Kantemir Balagov's Beanpole, a movie so steeped in the deprivations of post-war Leningrad that it carries nearly unbearable weight. I say that hoping that it won't deter you from seeing Balagov's artfully created story. Some movies should be hard to take.

Beanpole tells the story of two women who were warriors together during the war. Beanpole (Viktoria Miroshnichenko) is a tall woman who was sent home after receiving a concussion during the fighting. When the movie opens, Beanpole works in a hospital that treats badly wounded soldiers. She lives in a communal apartment with her young son Pashka (Timofey Glazkov). Sometimes, perhaps as a result of wartime trauma, Beanpole freezes, immobilized in the middle of chaos. If that weren't enough, her height makes her stand out in any gathering.

Despite her afflictions, Beanpole carries on a cheerful relationship with a paralyzed soldier (Konstantin Balakirev) who has no hope of recovering his mobility. The hospital's administrator (Andrey Bykov) can't conceal his weariness. He's overwhelmed by daily suffering he can't escape, but he looks out for Beanpole, whose real name is Iya. He offers her food so that her young son can escape the ravages of malnutrition. He longs for the days when all he did was treat simple hernias.

At one point, Iya brings young Pashka to the hospital. The soldiers play a game with the boy, asking him to mimic animals. Bark like a dog they suggest when the boy hesitates. How can he bark like a dog, one man asks? He's never seen a dog. They've all been eaten.

What happens next not only proves shocking but so deeply tragic that you may find yourself refusing to believe it. Balagov doesn't dwell on this agonizing moment. But we've already learned a hard truth. Even after the guns have gone silent, there's enough death in Leningrad to turn the city into a kind of morgue. And those who have survived can seem like the walking dead, pinched souls who have seen so much horror they've numbed themselves.

It doesn't take long for Masha (an amazing Vasilisa Perelygina) to turn up. She served with Iya at the front and seems eager -- too eager perhaps -- to satisfy her sexual cravings. Balagov reveals the nature of the bond between Masha and Iya, another surprise that's best discovered in a theater.

But know that as the two women try to adjust to post-war life, they'll encounter more than a few problems. A young man pursues Masha, eventually bringing her home to meet his parents in an excruciating scene in which the parents treat her like a social outcast. Don't fret, Masha can give as good as she gets.

For her part, Iya agrees to a scheme to make up for a loss in Masha's life. I don't think it qualifies as a spoiler to tell you that the plan, which I won’t describe here, doesn't work.

Beanpole delivers a shattering blow that reminds us that the price of war doesn't stop just because peace has been declared. Gifted and clear-eyed, Balagov proves that an anti-war movie needn’t be set on the battlefield.