When sexual abuse is normalized

The Assistant takes us inside a movie production company where the boss is a sexual predator. 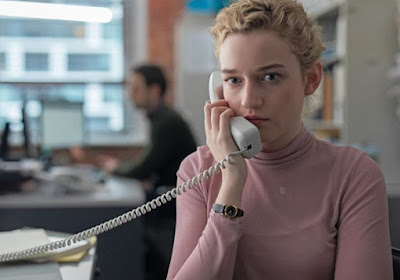 If you’ve followed Harvey Weinstein’s New York trial, you’ve read about women who say they were sexually assaulted by the former movie mogul. You’ve also probably seen plenty of stories that deal with the #MeToo movement in other areas; sadly, we’ve grown accustomed to a steady stream of news about women who’ve suffered sexual abuse at the hands of powerful men.

With The Assistant, director Kitty Green dives into the MeToo pool, but with the kind precision that only can be bred by minute observation. Unlike the splashier star-driven Bombshell, which looked at the women who helped bring down Roger Ailes at Fox News, The Assistant marries its larger themes to the quotidian details of life on the job. Green sets her story in the modest offices of an independent but evidently successful movie company.

,
It's clear from the start that the boss's authoritarian demands have been incorporated into the psyches of his employees. He expects his assistant (Julia Garner) to arrive early, turn on the lights and do menial chores designed to remind her of her lowly status. Green doesn't have to say it, but the message is clear: People will put up with a lot to feel as if they're part of the movie business.

Garner brings a sense of unease and palpable uncertainty to the role of a character who's trying to keep her head above water. When Garner's Jane finds an earring on the floor of the boss’s office, she can't ignore the fact that she’s working in a place where women may be expected to do more than recite lines when they audition for parts. Moreover, the boss’s lusts aren’t confined to actresses with aspirations.

When a young woman from Boise (Kristine Froseth) shows up to become another assistant, she’s taken to a fancy Manhattan hotel. Garner’s Jane knows that the newcomer is prey.

A pivotal scene finds Jane meeting with the company’s head of human resources (Matthew Macfayden) to express her fears about the safety of the newly arrived employee. Initially sympathetic, he twists Jane's perceptions and uses them against her. He’s supposed to help — but it’s the boss’s interests that he serves.

Green wisely keeps the boss offscreen. The choice makes sense because it’s clear that the other employees, including two men (Jon Orsini and Noah Robbins) who share space with Jane) are well-schooled in the company ways. The boss isn't really the movie's subject anyway; it's the impact of the warped office atmosphere on an impressionable young woman that matters.

There’s a downside to Green’s narrowly focused approach. By covering a single day in Jane's life, the story can feel constricted, but Green deserves credit for skillfully exposing the go-along, get-along atmosphere that the boss requires. The Assistant isn’t a story of great transformation; it’s a story about the ways in which a powerful man can create an environment in which everyone understands the unwritten rules.

You want to play, you'd best look the other way. Complicity becomes a job requirement.