When a woman's abuser can't be seen 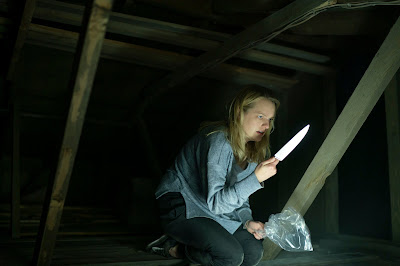 Her antagonist may be invisible, but the same can't be said for Elisabeth Moss. The actress dominates nearly every scene of The Invisible Man, a #MeToo-influenced take on the 1897 novel by H.G. Wells.

The setup: Brilliant scientist Adrian Griffin (Oliver Jackson-Cohen) has been abusing his wife, Moss's Cecilia. After Cecilia leaves him in the movie's pulse-pounding prolog, Adrian feigns his death. The twist: He's able to make himself invisible so that he can torment Cecilia. He refuses to let her go.

There's no mystery about what's happening to Cecilia, but Whannell wrings suspense out of Cecilia's situation: She can't convince anyone else that her former husband isn't dead. We're left to wonder when and how Mr. Invisible will strike next.

The screenplay, also by Whannell, adds some tasty complications. Turns out that Adrian's lawyer brother Tom (Michael Dorman) is the executor of the scientist's estate. He tells Cecilia that she's been left $5 million by Adrian, money that will be doled out in $100,000 installments.

Although the focus remains on Cecilia, additional characters turn up. Harriet Dyer plays Cecilia's sister, a woman with whom Cecilia hasn't always gotten along. Aldis Hodge portrays James, a cop who takes Cecilia into his suburban home when she's fleeing her husband. James' teenage daughter (Storm Reid) bonds with Cecilia. Reid's character wants to study design. Cecilia is an architect by trade.

Strong atmospherics add to the gathering unease. Whannell turns his camera into a stalker, giving us the Invisible Man's point of view at times when it's most frightening. He skillfully deals with the standard elements of horror, a scene in which Cecilia enters an attic in hopes of confronting her nemesis.

Scenes in the mental institution where Cecilia eventually finds herself are chilling and give Moss an opportunity for some Grand Guignol theatrics.

Moreover, Adrain's house -- the place where he maintains his lab -- is a tour de force of icy modernism, full of sleek surfaces that give you the impression that in Adrian's house, nothing has ever been misplaced. Adrian hasn't allowed an ounce of warmth to penetrate his retreat.

Now, it would be misleading if I didn't tell you that the story falters here and there and the whole idea of building a movie around the notion that someone has mastered the art of becoming invisible remains ... well ... preposterous.

But Whannell, who acted in the Saw movies and who wrote and directed Upgrade, clearly has chops for this kind of movie. He also demonstrates that he's paid attention to Alfred Hitchcock's understanding of how to create a menacing mood.

Now, I said that the movie seems like a spawn of the #MeToo moment. That's true -- and also obvious. It's worth pointing out an irony, though. Many of those accused of sexually and psychologically abusing women hardly could be called invisible. They were protected by their visibility and power.

OK, so The Invisible Man doesn't plumb every inch of metaphoric depth contained in its principal conceit. But Moss and Whannell serve up enough chills to make the movie as effective as James Whale's 1933 version. and unlike many wise-ass forays into the pop-cultural closet, The Invisible man wastes no time winking at us. It's smart enough to take itself seriously, which makes it easy for us to follow suit.