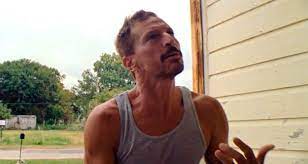 Director Sean Baker has made movies that explore parts of American life Hollywood usually neglects.
Tangerine, a 2015 movie shot entirely on iPhones, dealt with transgender life on the fringes of Los Angeles. The Florida Project (2017) followed a six-year-old girl who lived in a motel with her mother and, at least for me, represents the film in which Baker’s interests and his aesthetic approach were most successfully blended.
In Red Rocket, Baker tells the story of a fading porn star (Simon Rex) who returns to his hometown on Texas’s Gulf Coast. Desperate and broke, Rex’s Mikey gloms onto his estranged wife and former co-star (Bree Elrod) and her flinty mother (Brenda Deiss).
Mikey isn’t about to abandon his dreams. He believes he can re-lignite his award-winning porn career by moving behind the camera. He has confidence in his eye for talent. And why not? Wasn’t he the winner of an industry award in the oral sex category? He sees himself as a star-maker.
Mikey tries to build up a stake by selling pot for a woman (Judy Hill), who lives with her son (Marlon Lambert) and her tough associate (Brittany Rodriguez), a young woman whose face seems never to have been bothered by a smile.
He also befriends a neighbor (Ethan Darbone) who idolizes him.
Baker spends screen-time capital establishing the milieu in which Mikey finds himself, along with characters mostly played by non-professionals. He makes frequent stops at the Donut Hole, a shop where he first meets a 17-year-old worker he calls “Strawberry” (Suzanna Son).
Mikey immediately senses Strawberry’s porn star potential and courts her with his charm, dubious offers to help with her SATs, and lots of sex, amplified by one of Rex’s major assets. You can guess which.
Much of the story is played for humor. Sans car and funds, Rex must ride around Texas City on a bicycle. His massive self-delusion is fueled by irrepressible energy that he channels into non-stop verbal barrages.
An editor once told me on a particularly rumpled day that I looked like I was running even when I was standing still. The same goes for Rex, who moves through his days with Road Runner speed, often spewing his own hype.
Bake makes no judgments about Mikey’s career and Strawberry is no naive innocent. We know that Mikey has no qualms about ruining her life but she’s fired by some of the same desire to escape the stultifications of small-town life that drove him. She's sexually eager.
And despite all his maneuvering, Mikey seldom seems entirely contemptible. He’s still got his youthful zeal.
So what does Baker do with all of this? That’s the film’s problem. Despite its humor and observational ease when it comes to its characters and their location, the movie must at some point find a way to wrap things up. About three quarters of the way through Red Rocket’s  two-hours and eight minutes, the movie begins to feel long.
No fair telling more about what happens in the final going. but the movie wraps things up in ways that feel abrupt. Still, Baker makes good use of Rex’s ability to spin his way into a role that spills chaos all over the screen.
Posted by Robert Denerstein at 11:10 AM