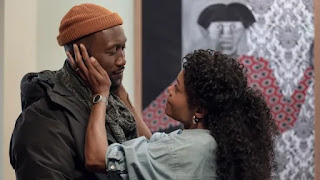 In Swan Song, Mahershala Ali plays a dying man who has been  given the opportunity to be replaced by a clone. If Ali's Cameron opts for cloning, his wife (Naomi Harris) and young son (Dax Rey) won't know that he passed away. For them, life will continue seamlessly.
To pull off the switch, Cameron, an artist by trade, must conceal his medical condition from his wife. The cloning will be performed under the direction of Dr. Scott (Glenn Close) who conducts her business in a stylishly modern house in the middle of nowhere.
While under Dr. Scott's supervision, Cameron meets Kate (Awkwafina), another patient who has agreed to be cloned.
Cameron is partly motivated by his wife's history. She only recently recovered from a period of crippling grief after the death of her twin brother.
Nothing, of course, is as simple as it initially sounds: Cameron finds it difficult to cede his life to a clone, a creation he meets as the movie progresses.
This raises another ethical issue: If Cameron decides to return to his life and tell his family that he's dying, the clone (named Jack until the day completely inhabits Cameron's life) will be "terminated."
Unfortunately, director Benjamin Cleary's debut feature can't get much beyond its central question, which (in a richer movie) might have been sufficient.
Flashbacks are used to develop the relationship between Cameron and Harris's Poppy, giving Ali and Harris the opportunity to play a love duet — with some difficulties, of course.
Even if you buy the idea that clones could become undetectable substitutes for humans, the movie can feel anemic. Cleary creates a version of the future that’s sanitized, sleek, and decidedly upscale. A hollow, edgeless feeling opens the door to for a flood of end-of-picture tear-jerking.
Despite its fine performances, Swan Song can feel like the clone of what might have been a better, more genuinely affecting movie.
Posted by Robert Denerstein at 2:35 PM