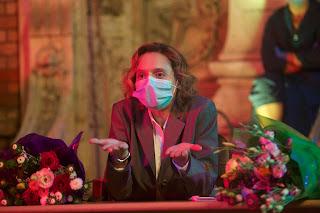 It's doubtful you'll see a wilder film this year than Bad Luck Banging or Loony Porn. If you have an aversion to hard-core sex scenes, you don't want to watch this movie -- or at least you'll want to skip the movie's opening.
Romanian director Radu Jude begins his film with what looks like a poorly made bit of kinky explicit porn. We have no idea where the film is going or whether this bit of sexual play is the film. Once the  sequence ends, the woman (Katia Pascariu) from those initial images is seen traversing the streets of Bucharest.
Jude offers an unguided tour of a city in the midst of the Covid 19 pandemic. The woman -- her name is Emilia -- walks purposefully but we don't know what's in store for her. The film creates a sense of mystery but it's easy to look past Emilia for glimpses of Bucharest's street life.
Emilia remains the main character, but she’s sharing screen time with Bucharest, a place where we learn movie theaters aren't exactly thriving and oddballs can be found, as well as typical urban frustrations.
Emilia hardly looks like the kind of woman we'd expect to see in a porn film, and that raises one of Jude's essential questions: Is sexual behavior, when viewed, inevitably pornographic or, maybe, just an example of the gap between public and private behavior?
And how do we regard the early scenes when we learn that the participants were husband and wife who produced a video that accidentally went viral?
The film's second part is more abstract and, for me, less successful. Jude mixes war footage, literary bits, and scenes from the violent Romanian past in a collage-like fashion that bemuses as much as it clarifies. Questions of moral complicity arise, and it's clear that Jude isn't interested in producing a celebratory ode to human behavior.
In the final act, Emilia reaches her's and the film's destination. It turns out that she's a history teacher who’s been summoned to her school because of the video. Parents are outraged.
An obvious question arises: Should she be dismissed from the school for behavior that some of the parents regard as scandalous?
An animated discussion reveals the views, prejudices, and blind spots of the various participants. In the end, it's these positions that interest Jude more than any sexual gymnastics.
A variety of themes are put on bold display: from hypocrisy to political oppression to bigotry to antisemitism to privacy rights and more.
No one makes a film like Bad Luck Banging expecting to speak to the multiplex crowd. But if you're looking for adventurous cinema with a penchant for seriocomic overstatement, have at it.
Posted by Robert Denerstein at 8:10 PM