This remake of a 1990 movie is more muddled than mind-bending. 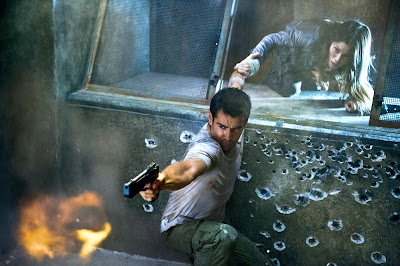 The remake of 1990's >Total Recall is a cluttered, unsatisfying attempt at dystopian sci-fi that ultimately loses itself in a blur of action, much of it presented in a visually confused jumbles.

Like the original, this revamp is based on a Philip K. Dick short story (We Can Remember It For You Wholesale), but the 2012 edition tends to brood more, partly because it replaces Arnold Schwarzenegger with Colin Farrell. Farrell plays Douglas Quaid, a factory worker who's part of the great lumpenproletariat that serves the wealthy in what's left of humanity after a series of devastating wars at the end of the 21st Century.

Farrell's Douglas Quaid lives in The Colony, a futuristic slum that's located in Australia. The Colony is home to legions of drones who staff assembly lines in the affluent United Federation of Britain. Workers from The Colony commute to the United Federation via a kind of super-subway called The Fall, which travels through the Earth at breathtaking speeds.

After missing out on a promotion, Quaid decides to spice up his humdrum life by visiting Rekall, a facility that enables its customers to live out any fantasy they choose -- and to retain a memory of it. With Rekall, illusions become indistinguishable from real experience.

Quaid opts for a spy fantasy, but before his illusory journey gets rolling, he learns that he's not really a worker bee, but a highly trained real spy who's being pursued by the Chancellor of the Federation (Bryan Cranston), one of the least ominous villains in quite some time.

The rest of the story puts a confused Quaid into a situation in which his certainty about everything -- including his identity -- is undermined. His wife (Kate Beckinsale) may not be his wife. If a young woman Quaid meets as he flees his pursuers (Jessica Biel) seems familiar, maybe it's because he's had dreams about her.

Of course, there's also a resistance, led by a character named Mathias, played by Bill Nighy, who demonstrates -- with very little screen time -- that an interesting actor can survive in the middle of a movie full of futuristic bric-a-brac. Aside from Nighy, I wouldn't call any of the performances distinctive.

The best thing about the movie are its CGI enhanced settings, which -- at their best -- are reminiscent of the dystopian sleaze of Blade Runner, another movie inspired by a Dick story. Neither The Colony nor The United Federation look entirely real, but they're interestingly realized, as are various forms of futuristic transportation, notably hover cars.

But when it comes to overall impact, Total Recall's mixture of turgid exposition and frantic chases miss the mark, and if memory serves me, the original movie was better directed by Paul Verhoeven than this one is by Len Wiseman, who previously wrote and directed a couple of Underworld movies.

Look, you know a movie's misfiring when you half wish the actors and story would get out of the way so you could better explore the worlds that the filmmakers have created. Wiseman avoids the kind of mind-bending wooziness that would have made the movie more challenging, subordinating Dick's heady themes to a ton of brain-numbing action that tends to make us indifferent about the movie's outcome.

An FYI: The original was rated R and included a trip to Mars; the remake is earthbound and rated PG-13.