On the road -- with comic twists 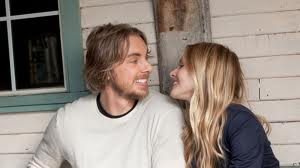 Hit & Run travels a road full of comic turns, and it's a fun ride -- up to a point. The movie tells the story of a guy (Dax Shepard) who travels to Los Angeles with his girlfriend (Kristen Bell). Among the movie's twists: This apparently sensitive young lover has been assigned to the witness protection program. Why? He received a break for testifying against his partners in crime led by a character played by Bradley Cooper. Bell's Annie -- an academic by trade -- has been offered a great teaching post in Los Angeles. It's a career move she can't pass up, and her boyfriend knows that if he doesn't encourage her, he'll probably lose her. Once Shepard's character leaves the small California town where he's living under the assumed name of Charles Bronson, he opens himself to pursuit by the folks who want to kill him for ratting them out. There's a dippy quality to the proceedings, and Shepard and Bell do a nice job of turning the movie into an oddball look at the ways in which relationships develop. Bits and pieces of information about Shepard's character gradually (and amusingly) come to the fore. Offbeat humor sustains some interest until the time Bronson's father (Beau Bridges) turns up. Nothing wrong with Bridges's performance; it's just that the movie then breaks out the heavy artillery and blasts away whatever minor charms it has spent time accuring. Tom Arnold is meant to add laughs as a bumbling sheriff with a streak of monumentally bad luck behind the wheel, but his character's propensity for car carnage becomes repetitive. Although Hit & Run has loopy high points, it ultimately runs out of road. Shepard, who co-directed with David Palmer, throws in car chases (seldom a sign of a fertile imagination), but they get decent mileage out of Charlie's souped-up 1967 Lincoln Continental, a speedy remnant from his former felonious life.

Posted by Robert Denerstein at 4:20 PM