It was good to be the queen

How much is too much? For some people, there are no limits. 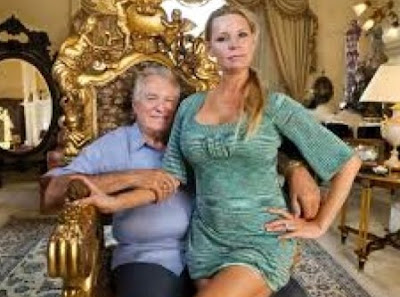 In Mel Brooks' The Producers, the larcenous theatrical producer Max Bialystock looks out the window of his office and spots a passing Rolls Royce.

"When you got it, flaunt it,'' Max yells, a reflection of his own grandiosity and a lesson to Leo Bloom, the timid and trembling accountant who's supposed to check Bialystock's books.

The Siegels -- the couple at the center of director Lauren Greenfield's fascinating new documentary, The Queen of Versailles -- flaunt it to a degree that even Bialystock might find embarrassing.

After making a fortune in the time-share business, David Siegel, 74, and his wife Jackie, 43, set out to spend some of their treasure on construction of a 90,000-square-foot house inspired by and named for Versailles. Located in Orlando, Fla., it would be the biggest house in the U.S.

When Greenfield began her work, Siegel was on top of the world as the owner of Westgate Resorts, a company that boasted the biggest time-share business on the planet. Running this extravagantly successful business fueled Siegel's pasha-like existence. He had all the trappings of inordinate wealth: private jets, limos, the big house. You name it.

But Siegel became a victim of the 2008 crash that sucked the life out of many an enterprise. His operation depended on the availability of cheap money. He sold time-shares to folks who put little money down. When the banks cut him off, his business began to suffocate.

I won't attempt to describe the financial workings of Siegel's empire. The important thing to know -- as far as this documentary is concerned -- is that the house of cards toppled. A movie that may have begun as a look at the lifestyles of the fabulously nouveau riche became a chronicle of belt-tightening and downward mobility, so much so that upon boarding a commercial flight for the first time, one of the seven Siegel children wonders what all those strangers are doing on the family plane.

I've read that David Siegel is suing Greenfield for defamation. I don't know the basis of the suit, but it hasn't stopped the movie from playing around the country. If you see it, you'll discover an intriguing chronicle of a go-go business hitting the skids, of a family under financial strain and of a woman (Jackie) whose taste you may not admire, but who shows more spirit and adaptability than you might expect.

You also get to watch as a businessman gradually loses his mojo.

And to hear Siegel tell it, he had plenty of mojo. Early in the film, Siegel claims that he helped George W. Bush win the presidency. Asked exactly how he did that, Siegel demurs. It might not necessarily have been legal, he says.

For all Siegel's wealth and influence, it's Jackie who holds the movie together. After earning an engineering degree in college, she worked for IBM. She turned her back on the wage-slave world to become a model. Her marriage to Siegel is her second. Jackie always seems to have kids underfoot. She loves dogs -- both living and a couple preserved by taxidermy, and she has a big-screen presence to rival her bust size. She's not one to be ignored, and you kind of like her -- in the way that you might like someone who has lost touch with the way most people live, but who doesn't seem to look down on anyone.

When hard times strike, the Siegels are forced to trim their staff of servants, which means they're forced to fend for themselves in their 26,000-foot mansion, the one they expected to leave when Versailles was completed. It never was.

I couldn't always decide how I felt about these people, but I watched Queen of Versailles with a kind of flabbergasted disbelief.

When Jackie, now grappling with reduced circumstances, is forced to rent a car, she asks the man at the counter for the name of the driver; she's evidently unaware that those who rent from Hertz must chauffeur themselves. Her plans for Versailles are so monumentally overstated that you don't know whether to laugh or cringe.

Oh well, no one ever said money could buy taste, and it's not possible to watch The Queen of Versailles without wondering whether the Siegels are getting their comeuppance. That may not be fair. The bankers that ultimately choked off Siegel's cash -- the air supply of his business -- seem to have paid far less of a price enabling such businesses to flourish.

Some people have suggested that what happened to the Siegels stands as a metaphor for a society marked by greed, out-sized ambition, over-reaching, debt accumulation and wanton materialism.

I don't buy that argument. Most of the people I know are not greedy, do not indulge their every desire, and live in proportion to their economic situations. The Siegels don't need to symbolize the collapse of the entire U.S. economy in order for Queen of Versailles to command attention. They're watchable all on their own, people whose lives were blown up so large, they couldn't help but explode.


Posted by Robert Denerstein at 11:36 AM