Should this marriage be saved?

Tommy Lee Jones and Meryl Streep are unhappy together as a long-time husband and wife in Hope Springs.
, 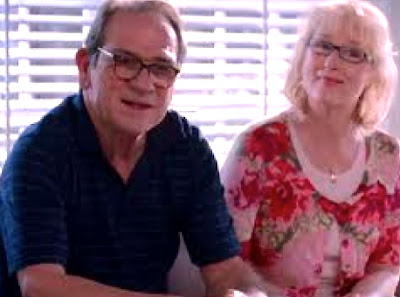 Hope Springs deals with a marriage that's foundering. I've seen the movie referred to as a "dramady," which means it's supposed to blend comedy and drama. I guess that's a fair description, but I wouldn't call Hope Springs great drama or sharp-edged comedy. Mostly, the movie stands out for being an adult-oriented movie that arrives in the middle of a comic-book summer and for being willing to show aging characters talking -- albeit awkwardly -- about sex.

Nothing dramatic happens to bring this marriage to the brink, which is more or less the point. Hope Springs has more to do with the deadening accrual of habit than with rash infidelities or Virginia Woolf-style knock-down drag-outs.

Initially, I wondered whether Tommy Lee Jones, an actor who can seem as angry as a clenched fist, would team well with Meryl Streep, an actress who excels at both drama and comedy. I'm not sure I ever bought them as a couple, but I watched with interest as they worked over material that vacillates between compelling and second-rate.

Here's the drill: Kay (Streep) and Arnold (Jones) have been married for 31 years. Five years before we meet them, Arnold hurt his back and began sleeping in the guest room. He never returned to the bedroom he and Kay once shared. Arnold's an accountant. Kay works in a clothing store. And if you happened to meet them in real life, you'd probably think they were as happy as most other couples in Omaha, which is where they live.

Kay knows differently. She's not content, even if Arnold is comfortable in the rut he's dug for himself. He goes to the office. He comes home. He eats dinner. He falls asleep in front of the TV while watching the golf channel.

In a bold move, Kay enrolls in a $4,000 intensive marriage counseling session in Maine. These sessions are conducted by Bernie Feld (Steve Carell), a psychologist who has written a best-selling book called You Can Have the Marriage You Want, the title of which pretty much explains what it's about.

Predictably, Arnold has no interest in therapy. When he realizes that he either must accompany Kay to Maine or give up on his marriage, he boards a plane -- not that he quits complaining. Counseling won't do any good. The psychologist's a fraud. The whole thing costs too much.

I've got two views about Hope Springs, which was written by Vanessa Taylor and directed by David Frankel, who also directed Streep in The Devil Wears Prada. There's an undeniable element of daring here, particularly in the therapy scenes, which -- in fairly short order -- address Kay and Arnold's badly depleted sex life.

At its best, the movie plays like a less taxing version HBO's In Treatment, and I half wondered why Carell had usurped Gabriel Byrne's role as one of entertainment's more credible shrinks.

To the movie's credit, therapy isn't shown as an instant cure-all. For Arnold and Kay, therapy is full of bumps, detours, bruised feelings and anger.

Carell plays his role straight in a movie that finds its best moments in his character's office. Frankel's few attempts to open things up can seem superfluous. An example: Kay visits a local bar where she encounters a sympathetic bar tender (Elizabeth Shue).

I said I was of two minds about Hope Springs. Here's the second. I found it almost impossible not to be a little too aware of the acting. Jones gives Arnold the hunched posture of a man who's pushing through life. Arnold's running on residues of resolve and lowered expectations. Streep finds Kay's weariness, her yearning and also her tendency to be a little clueless at times.

The supposedly "humorous" parts of the movie aren't all that funny, although the trailer seems designed to persuade us that Hope Springs is a comedy.

So what am I saying? Although parts of Hope Springs are commendable, I didn't totally buy Taylor and Frankel's exploration of the calcifications that can be wrought by age, habit and lack of imagination. I wish the movie had been a little tougher.

So I'll split the difference. Yes, it's refreshing to see a movie that deals with adult themes. But Arnold and Kay's troubled marriage finds itself in the middle of a movie that seems to want to explore real issues, but -- in the end -- doesn't want to ruffle too many feathers, even those belonging to Arnold and Kay.

It is good article for all