For the most part, this has been a summer of discontents, to borrow (badly, I suppose) from Shakespeare.

The pleasures we have found at the movies have been mostly on the fringes, so it's probably entirely appropriate that Labor Day weekend, regarded as the conclusion of summer ever since the days when politicians put their white shoes back in the closet for another year, follows suit.

A DIRECTOR GRAPPLES WITH CRISIS ON AND OFF SET 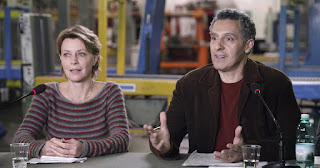 In Mia Madre, Italian actress Margherita Buy plays a woman with plenty on her plate. Her character -- also named Margherita -- is directing a movie, dealing with her aging mother's decline, trying to be a good mother to her teen-age daughter, and seeking a break from her relationship with a needy lover. She's also trying to coax a performance out of an egotistical American actor (a funny John Turturro) who shows up to play the part of a beleaguered factory owner in a movie about labor/management conflict. Director Nanni Moretti appears in the movie as Margherita's brother, a reassuring man who holds together even when others are falling apart. Moretti (Dear Diary, We Have a Pope and The Son) follows Margherita as she rushes between her movie set and the hospital where her once highly competent mother (Giulia Lazzarini) is slipping ever deeper into the fog of dementia. As if all this weren't enough for a single movie, Moretti includes flashbacks, fantasies, and, in what seems to be a case of piling on, a flood that forces Margherita out of her apartment. Perhaps directing a movie and trying to balance an emotionally taxing personal life aren't entirely different enterprises. Both require the ability to function in the midst of apparent chaos and both require belief in the illusion that circumstances can be controlled.

A STRESSED OUT SOLDIER FINDS A CHALLENGING NEW JOB 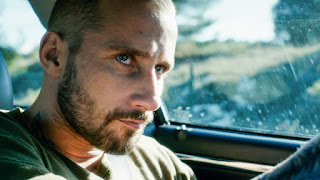 Director Alice Winocour (Augustine) succeeds mostly in frustrating us with Disorder, a portentous thriller about a traumatized French soldier (Matthias Schoenaerts) who lands a temporary job guarding the family of a Lebanese businessman (Percy Kemp). When the ostentatiously wealthy tycoon leaves on business trip, Schoenaerts' Vincent is left to fight a series of invaders who are connected to a murky, arms-related plot in which the businessman's wife (Diane Kruger) and her young son (Zaid Errougui-Demonsant) are targeted. Sensible behavior (leaving the gated mansion that's under attack, for example) too often gives way to atmospherics as Schoenaerts and Kruger struggle with the screenplay's insistent vagueness. To me, their efforts went for naught. Winocour teases us into involvement without giving Disorder a satisfying enough payoff.

IS HE ACCIDENT PRONE OR IS SOMETHING ELSE AFOOT? 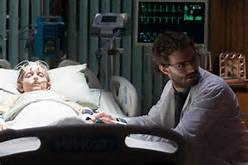 The 9th Life of Louis Drax begins as if it's going to be a seriously intriguing drama about a nine-year-old boy who spends much of the movie in a coma after he falls off a cliff. Rather than an examination of how people cope with tragedy, The 9th Life begins raising doubts about whether Louis (Aiden Longworth) is accident prone or the victim of sustained abuse. As director Alexandre Aja moves through a variety of flashbacks, we meet Louis' angry stepfather (Aaron Paul), a neurologist (Jamie Dornan) who wants to help the boy, and the boy's mother (Sarah Gadon). Dornan's character believes that it's possible to carry on mind-melding communication with people in deep comas. Additional complications arise when Dornan's character, who's married, begins to fall for Gadon's character. Rather than building on its strong premise, Max Minghella's screenplay -- based on a 2004 novel by Liz Jensen -- devolves into a strained and unsatisfying thriller that's intent on leading us down one more muddled path.