Observing life on a small scale 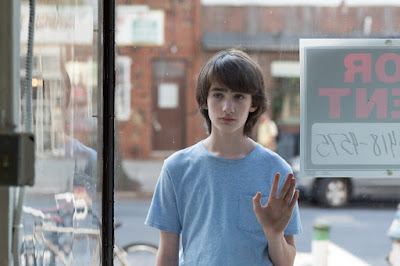 Director Ira Sachs (Love is Strange) brings a gentle but knowing touch to Little Men, a story about two boys who become friends in Brooklyn.

That may sound like the basis for an achingly ordinary feel-good story, but Sachs's movie is fueled by issues as diverse as a father's failure to become the actor he hoped to be and a family's struggle with money issues -- not to mention the disruptive consequences of urban gentrification.

At the start of the movie, 13-year-old Jake (Theo Taplitz) moves from Manhattan to Brooklyn with his parents (Greg Kennear and Jennifer Ehle).

Dad's getting a bit long in the tooth for a performer who still works in the kind of small New York productions for which the actors aren't paid. Mom, a psychotherapist, supports the family.

Money being an obvious problem, the family is relieved to move into a Brooklyn apartment that Kenner's character inherits from his recently deceased father.

The apartment sits atop a store that comes with the building. The store is occupied by Leonor (Paulina Garcia of Chile's Gloria), a seamstress who never paid market value for her shop. Jake's aging father evidently welcomed Leonor's company, and adopted a casual attitude toward collecting the rent.

Pressed for money, Jake and his sister (Talia Balsam) believe they're justified in asking for a reasonable rent increase. Leonor thinks otherwise.

An infectiously likable kid who wants to be an actor, Barbieri's Antonio perfectly complements Jake's shyness. The friendship between Jake and Tony gives Sachs an opportunity to celebrate the freedom of city life for a couple of 13-year-olds.

Sachs and co-writer Mauricio Zacharias develop a carefully balanced drama that revels in the delights of boyhood, understands the psychological complexities of the adult relationships and isn't out to slam anyone ever the head.

Credit Sachs with taking us deep into the lives of people whose struggles may not be epic, but never feel anything less than real. In a time of unashamed movie preposterousness and bloat, Sachs's movie reminds us that observing life on a small scale beats not observing it at all.