Tim Burton tries his hand a weird YA novel. 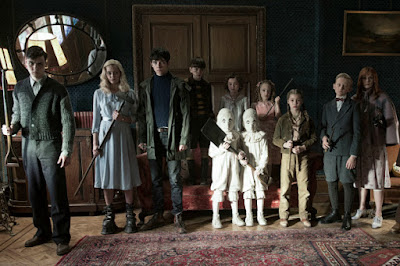 The YA novel, Miss Peregrine's Home for Peculiar Children, seems a perfect vehicle for director Tim Burton, whose ability to blend effects, story and mood tilts toward the dark and perverse without sacrificing something we might call general appeal.

With movies such as Edward Scissorhands, Sleepy Hollow and Corpse Bride, Burton has developed a following based on his distinctive style and a willingness to dip into the dark side of his palette.

Considering all that, Miss Peregrine should have been a slam-dunk.

But for reasons having to do with a glut of plot and the somewhat confusing creation of an alternate reality, Burton's adaptation of Ransom Riggs' 2013 novel proves only fitfully engaging.

Burton mounts a variety of captivating images -- from scary monsters to moments frozen in time to a floating girl who wears weighted shoes to keep herself earthbound.

At times, Burton seems to have been inspired by the Quay brothers, whose work with stop-motion animation surpasses almost all other cinematic peculiarities.

After consultation with a child psychologist (Allison Janey), Jake's parents (Kim Dickens and Chris O'Dowd) decide that Dad should take the boy to Wales.

Once in Wales, Jake finds Miss Peregrine's school in ruins, destroyed by a direct hit from a German bomb during World War II.

But as he rummages through the bombed-out rubble, Jake begins to see the peculiar children of the movie's title. Eventually, he time travels back to the day the school was bombed.

He soon learns that Miss Peregrine (Eva Green), the school's head mistress, has the ability to stop time by creating time loops. Moments prior to the German bombing, Miss Peregrine stops the clock, and the day again repeats. Her charges are saved, although they're suspended in time. They never age another day.

For emotional heft, the movie focuses on the developing relationship between Jake and Emma (Ella Purnell), the girl who floats. He also meets Enoch (Finlay MacMillan), a kid who knows how to give life to expired creatures.

There's also an invisible kid and a girl who has a mouth with sharp predatory teeth on the back of her head; at times, the movie feels like an off-kilter take on X-Men, a story about young people who are heroic precisely because they don't fit into any mold.

Burton embeds all of this in a jargon-heavy screenplay that requires those unfamiliar with the novel to master a new vocabulary. An example: Ymbrynes, of which Miss Peregrine is one, can create time loops. You'll also find monsters called Hollowgasts -- or some such.

By the end, a new villain surfaces, Samuel L. Jackson's Barron, a creature known as a wight; i.e., a Hollowgast that can assume human form after devouring lots of eyeballs plucked from peculiar children.

And, yes, I gave Google a workout to catch up.

No stranger to over-the-top menacing, Jackson does what's expected of him. Butterfield doesn't bring much by way of expression to his role; and it falls to Purnell's Emma to make the biggest impression.

Not surprisingly, all of the actors are a bit outdone by the movie's copious effects.

Finding the story less than compelling, I drifted from scene-to-scene, wondering how Burton achieved some of the movie's more impressive images and trying to decipher the screenplay's murky references to the Holocaust.