A revenge film and a bold British musical 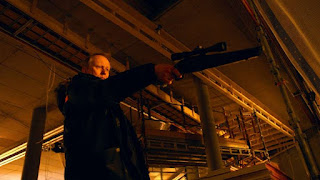 The Norwegian movie, In Order of Disappearance, has a regrettably familiar undertow, perhaps a result of the pervasive influence of the Coen Brothers and Quentin Tarantino. Following a schematic structure in which various sections are introduced with titles, director Hans Petter Moland takes us through a series of revenge killings carried out by a snow plow driver (Stellan Skarsgard). The driver's son, we quickly learn, was mistakenly killed in a drug-related crossfire. Skarsgard has the chops to make us believe that an apparently ordinary man has the grit to carry out such a relentless mission. A character called The Count (Pal Sverre Hagen) becomes the most colorful villain in the piece, a brutal fellow who's constantly being frustrated by mundane problems, arguments with his former wife (Brigitte Hjorth Sorensen) and concerns about getting his kid to school on time. With a movie such as this, much of the kick stems from how Skarsgard's Nils dispatches his prey, but additional complications ensue: Rather than focusing on Nils, the unsuspecting Count decides that a rival Serbian gang must be muscling in on his territory. A weary looking Bruno Ganz portrays an aggrieved Serbian gang boss who's also trying to avenge the death of a son. A desolate snowbound setting gives the entire enterprise frosted chill, and the movie manages to hold our interest despite its somewhat derivative feel. Credit veterans Skarsgard and Ganz for giving In Order of Disappearance weight it otherwise might have lacked.

AN ENGLISH MUSICAL BASED ON SERIAL KILLINGS 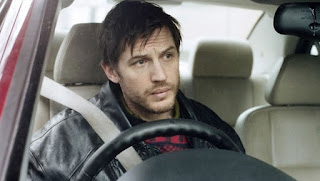 Forget the photo that accompanies this short review. The British actor Tom Hardy appears in only one scene in London Road, a musical based on a series of 2006 killings that terrorized Ipswich, a town in Suffolk, England. A forklift operator named Steven Wright (never seen in the movie) was convicted of murdering five prostitutes during a six-week period that attracted tabloid interest and set the Ipswich townsfolk on edge. Rather than follow a thriller path, the screenplay by Alecky Blythe explores the impact of the killings on the town -- both before and after the killer is apprehended. It's hardly surprising that the townsfolk begin to regard one another with suspicion or that some of their judgmental attitudes about prostitution are put on display. First produced as a play, London Road makes a reasonably good transition to the screen under the guidance of director Rufus Norris. Composer Adam Cook's urgent score fits the movie's fleet 91-minute length. London Road is further distinguished by the fact that much of the dialogue (including moments in which actors speak directly to the camera) derives from real interviews with Ipswich residents. In sum, not quite the groundbreaker it must have felt like on a London stage, but still worth a look.