A movie that understands real horror

The Polish movie Demon looks at what happens when the past is buried. 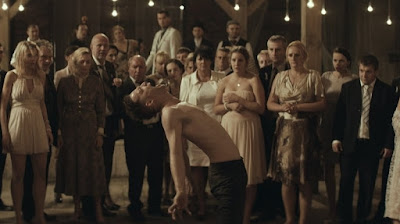 Early in Demon, an outrageously conceived Polish film that explores a haunted part of the country's past, we see a huge construction site where crews have dug deep into the earth. In an important sense, excavation becomes the movie's subject -- not only what it means to dig into the soil, but to uncover disturbing remnants of a past that resists burial.

Because of its title, Demon can be seen as a horror film -- albeit one that owes a debt the Yiddish play The Dybbuk. Still, if you're expecting to be frightened by typical horror film ploys, you'll surely be disappointed.

The story begins when Piotr (Israeli actor Itay Tiran) boards a boat to reach his destination, a small Polish village. Piotr has traveled to Poland from Britain to marry Zaneta (Agnieszka Zulewska), a woman he met in London.

Zanete's father (Andrzej Grabowski), who runs the construction site we've just seen, expresses doubt about the impending marriage's chance for success, but has little choice but to go along.

Piotr and Zaneta plan to live in a rundown villa that she recently inherited from her grandfather. Skilled in construction, Piotr wants to build a paradise for himself and his bride.

Using a borrowed backhoe, he starts digging a hole for a swimming pool. His digging turns up a skeleton. Later, he has a ghostly vision of a young woman, presumably the spirit released along with the bones he's exhumed.

Most of the movie takes place at the wedding reception, held at the crumbling home the couple plans to renovate.

As the party progresses, Piotr's behavior grows increasingly strange. Gradually, it becomes clear that he's being possessed by a spirit, the ghost he inadvertently unearthed.

Adept at the art of denial, Zaneta's father keeps urging her boisterous but good-hearted brother (Tomasz Schuchard) to keep the guests well lubricated.

When it comes to vodka, the guests need little encouragement. Thanks to drink and a celebratory atmosphere, the revels becomes more and more frenzied, and we begin to realize that the wedding itself may be a form of crazed collective denial.

Denial of what? Eventually, director Marcin Wrona makes it clear that the townsfolk are eager not to be reminded about Poland's once thriving Jewish population.

When the ghost begins speaking through Piotr, her language is Yiddish. As the only person in town who understands Yiddish, the town's lone remaining Jew talks to the ghost. He begins to recall a past that he, too, probably has tried not to remember.

It may seem odd, at this point, to say that Demon has a comic side. Wrong reveals his wildly satiric impulses as the guests become sweaty, and the hem of the bride's dress becomes mud-stained. Intermittent torrential rains flood the reception.

No ordinary horror film, Demon raises questions about Polish complicity during the war years when Nazis began the systematic murder of Europe's Jews. How did grandpa wind up with this house? How, when the Nazis were busy rounding up Jews for mass shootings or shipment to death camps, could a Jewish skeleton remain behind?

Demon leaves us with much to ponder, hinging its drama on a contradiction: A haunted past tends not to stay buried. At the same time, the urge to deny that past proves astonishingly powerful.

At one point Zaneta's father strains to reach a consensus among the guests. They should, he says, agree to forget "what they didn't see."

What has been seen, of course, can't be unseen, but Wrona leaves it for us to decide whether the father's advice will be followed or whether the past will be acknowledged, digested and properly memorialized.

It should be noted that Wrona committed suicide just before his film had its premiere at last year's Gdynia Film Festival in Poland. His death adds a terrible footnote to a movie in which it's not really a ghost that does the haunting but a country's fraught history.