A comedy that doesn't age well

Morgan Freeman, Michael Caine and Alan Arkin are all wonderful actors, but they're not miracle workers. They can't save Going in Style. 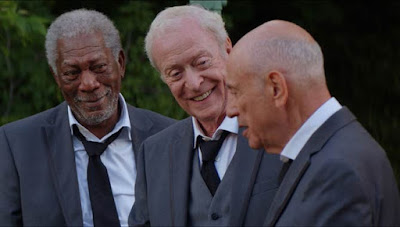 Three aging friends who are trying to scrape by on Social Security organize a bank robbery. That was the premise of a 1979 movie called Going in Style, which starred George Burns, Art Carney and Lee Strasberg. Writing about that movie in the Chicago Reader, critic Dave Kehr said the movie, which was directed by Martin Brest, "imposes a quiet, attentive style on the story, saving it from cuteness and emotional facility. There are laughs, but the prevalent tone is one of discreet compassion, without condescension or sanctimony."

Leap ahead to 2017, and you'll find another movie entitled Going in Style, which has the same basic premise, but which stars Morgan Freeman, Michael Caine and Alan Arkin. Sadly, Kehr's quote isn't applicable to this new comedy, which has little to say about aging and hardly draws blood with its stab at social relevance. Our aging and embittered protagonists consider robbing a bank because the company for which they worked for many years has dissolved their pensions.

It shouldn't need saying, but I'll say it anyway. Freeman, Caine, and Arkin are all worthy of much admiration, and they do their best to keep this leaky ship afloat. They're all watchable, but the material with which they're working proves neither funny nor poignant.

Caine portrays Joe, a retired factory worker who lives with his daughter and granddaughter in Brooklyn. After falling behind on house payments, Joe's on the verge of losing his home. Freeman's Willie and Arkin's Albert are roommates who share an apartment across the street from Joe's house. They, too, worked at the factory and will fall into dire straits when their pension checks stop.

To further complicate matters, Willie needs a kidney transplant because dialysis no longer is doing the job for him.

Director Zach Braff, working from a script by Theodore Melfi, who re-worked the Edward Cannon story on which the 1979 movie was based, takes us through a variety of stock situations, including a ludicrous (but not funny) warm-up robbery in which the three men enter a local convenience store to try their hands at shoplifting.

Recognizing their incompetence at larceny, Caine's Joe consults with his former son-in-law as he searches for a consultant to help plan a bank robbery. The trio commits to stealing only enough to cover their pensions. Any additional monies will be given to charity.

Enter Jesus (John Ortiz), a pet-store owner who instructs the would-be felons in the intricacies of bank robbery, which he regards as an art.

Additional support comes from Anne-Margret, as an older woman who's interested in Arkin's character, from Matt Dillon as an FBI agent, and from Christopher Lloyd in the thankless role of a demented senior who belongs to the same neighborhood club as the movie's three main characters. If nothing else, Lloyd demonstrates what you might expect, senility is no laughing matter.

Braff, still best known for his work on TV's Scrubs, has directed before (Wish I Was Here and Garden State), but his touch here is far from deft.

Because the movie's stars all qualify as treasures of the cinema, the best approach to Going in Style might be simply to sigh with disappointment and move on.