Movies in the time of war and heartbreak 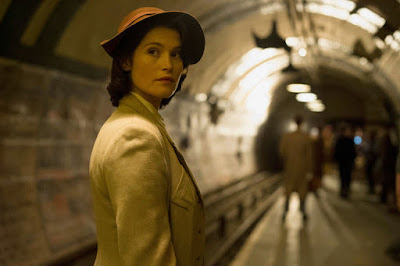 I can't recall the last time I saw a movie set during World War II that made me feel better than when I sat down to watch it. Don't get me wrong, Their Finest, the movie to which I refer, never mires itself in cheap sentiment. Rather, it celebrates the pluck required to persevere in the face of terrible loss -- and, in this movie, those losses can be felt.

On one level, Their Finest is a comedy about British moviemaking during the World War II. It's 1940, and the British government wants films that are both authentic and inspirational. In search of a realism that also will appeal to the female audience, the Ministry of Information recruits an advertising copywriter (Gemma Arterton), who may have a flare for such matters. Initially, Arterton's Catrin is assigned to writing only women's dialogue, which -- in the trade -- inelegantly was referred to as "slop."

Danish director Lone Scherfig (Italian for Beginners and An Education) offers period-piece comforts and a cast that hits every note, including the most acerbic, with bracing clarity.

The heart of the story involves a burgeoning relationship between Arterton's Catrin and a snidely witty screenwriter played by Sam Claflin. Because of his writing skills, Claflin's Tom Buckley has been exempted from the military; perhaps his position at the home front explains Tom's cynicism. But Claflin reveals a man who genuinely cares about the movies and hopes to make a good one.

There's a complication: Catrin happens to be married. I won't say more about how the movie works this out, but know that Arterton and Claflin make a great screen couple. They argue plenty, but also set off sparks -- and, even better, their attraction springs from something akin to an appreciation of each other's skills. They're unlikely soul mates.

Joining Arterton and Claflin are Richard E. Grant, as a studio head, and Bill Nighy as an actor whose ego is stronger than his recent successes. If you didn't already know, Nighy qualifies as a comic treasure, an actor who can inflate a character's sense of self-importance without turning an audience against him. His timing remains exquisite, and he brings sincerity to scenes that require it without being cloying.

I'd love to see an entire movie about Nighy's character and Sophie (Helen McCrory), the woman who eventually inherits the job of being his agent.

The movie's writers and filmmakers are working on a screenplay for a film about Dunkirk, which is supposed to buoy British spirits, bring tears to the eyes of war-weary Londoners and help persuade the US to join the war effort. To support the latter purpose, a hunky American (Jake Lacy) who has been flying in the British air force is foisted on cast and crew. He flies better than he acts.

Set during a time when most of Britain's young men were away, Their Finest shows how the door of opportunity opened for women. Arterton's character is more than ready to walk through it. It also makes clear the horrors of the Blitz, the ceaseless bombings that made life in London truly hellish. Young men were dying at the front and civilians were dying at home.

OK, it's not exactly a revelation to say that we must keep on even when times become terribly bleak, but I had no problem watching this group of actors deliver the message.

Scherfig manages a neat trick. She has made a movie that juxtaposes smiles and heartbreak and emerges on the far side of maudlin. Good for her.