Capturing the rhythms of real life

Director Hirokazu Koreeda tells a story about a man who has lost his way -- and many not want a map. 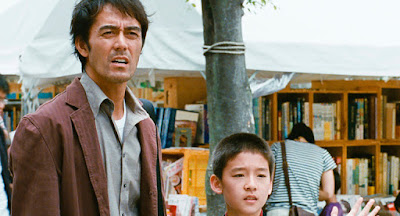 Instead of reaching out and dragging us into his films, Koreeda allows us enough space to approach situations that resist melodramatic overstatement. Slowly and deftly, he entangles us in the lives of his characters.

In his new film, After the Storm, Koreeda focuses on Ryota Shinoda (Hiroshi Abe), a man who's approaching middle age with only one achievement under his belt: He wrote a prize-winning first novel. Since then Ryota has accomplished virtually nothing. He works for a low-grade detective agency, gambles away whatever money he earns, and generally fails to meet any of the responsibilities that a husband and father should meet, which is why his marriage fell apart.

Ryota may be another the many movie men who refuse to grow up, but as the long-faced Abe plays him, he's hardly despicable. Although he treats child support payments with indifference and isn't above asking his appropriately judgmental sister (Satomi Kobayashi) for money, he clearly loves his son Shingo (Taiyo Yoshizawa).

Ryota also frets about his ex-wife and her new boyfriend, a guy who buys Shingo the baseball glove that Ryota had promised to deliver. Ryota knows he's a man who can't be relied on to keep a promise, but still resents the role another man might play in his son's life.

If the plot has a prime mover, the role falls to Ryota's mother (Kirin Kiki). She understands that her son is very much like his late father, a man who made frequent visits to the local pawn shop to support his gambling habits. Mom lives in a suburban apartment complex. She wonders when her son will buy her a better apartment. Her face and manner tell us that she knows that's wishful thinking.

Like many older people, Kiki's character seems resigned to her fate, but not without showing traces of humor and spunk.

The storm of the title arrives in the form of a typhoon that strands Ryota, his former wife and his young son at his mother's apartment. As she contemplates her own demise, Ryota's aging mother hopes that she can help reconstitute the family her son shattered, but Mom is no dope. She knows she's working against very long odds.

It's possible to conjecture that the storm of the title is not the typhoon that slams into this coastal suburb, but the series of events that broke Ryota's family apart in the first place.

Koreeda -- who works with an unfussy camera -- takes us through a transitional period in Ryota's life, although it's not clear that he'll ever defeat the psychological demons that keep him from fulfilling his promise.

If you're after cinematic flamboyance, Koreeda probably isn't your kind of director. But if you have a taste for a movie that tries to show us the consternation of characters whose lives haven't worked out as anticipated, you may well find yourself warming to a movie that looks at lives that are not very far from our own -- unless, of course, you're one of those rare souls who's living precisely the life you imagined for yourself when once you were young.