She's gifted. Is that good?

Chris Evans stars in a story that asks: What's the best way to raise a math genius? 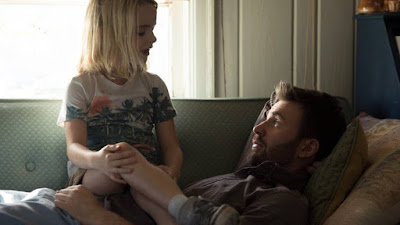 Is it better for a child to be supremely gifted or ultra-normal? Let's define some terms. In the case of the new movie Gifted, a genius child is one who can hang with mathematicians twice or even three times her age, figure out brain-busting equations and become a splendid freak of nature, a prodigy who deserves to be separated from her rude and scoffing peers. Normal? Well, those kids play with other children, don't consider themselves part of brainiac aristocracy and generally fit into their surroundings.

If those sound like extremes, you're right. And that's part of the trouble with Gifted, which concocts many scenes designed to advance one side or the other. Nuance? Not really.

Frank (Captain America's Chris Evans) takes care of his seven-year-old niece Mary (Mckenna Grace). Mary's a math genius, but Frank -- who lives in Florida and who scratches out a meager living repairing boat motors -- doesn't want his niece to become an isolated outsider, a girl segregated from other kids by her astronomical IQ.

Mary lives with Frank because her mother (also a math genius) committed suicide. Before her death, Frank's sister suggested that Frank raise Mary. Mary's late mom grew up under the harsh tutelage of a mother (Lindsay Duncan) who focused on math prizes to the exclusion of nearly everything else.

Against the advice of his neighbor (a wasted Octavia Spencer), Frank sends Mary to public school. Her teacher (Jenny Slate) quickly recognizes Mary's capabilities and suggests -- along with the school's principal -- that Mary enroll in a school for gifted kids. A full scholarship will be arranged, but Frank resists.

To add to the movie's inflated poignancy, Mary has a one-eyed cat for a pet, another of the film's outcasts.

Before the movie ends, Duncan's Evelyn sues her son for custody of Mary. The drama takes us through foster homes, courtroom scenes, separations that are supposed to be heartbreaking, and the near-death of the one-eyed cat.

The movie ignores many potentially rich dramatic pathways, the most notable being its refusal to explore why Frank quit his job as a Boston philosophy professor to become a blue-collar dropout in Florida. If Frank really wanted to become Mary's guardian, he might have kept his job and his health insurance. He would have avoided looking irresponsible and bereft.

But Gifted isn't complex or subtle enough to explore such contradictions: They simply become part of a backstory that's more suggested than probed.

Shorn of his Captain America persona, Evans seems only a little less bland; Duncan does her best to convey the arch elitism if an IQ snob and young Grace proves cute and engaging.

The movie's basic conflicts are interesting enough, but director Marc Webb (The Amazing Spider Man and (500) Days of Summer) doesn't plumb enough depths: Instead, he throws lots of tasty ingredients into his stew and overcooks them until they soften and (alas) turn to mush.