A movie that doesn't keep its promise

Christian Bale and Oscar Isaac star in The Promise , a would-be epic that touches on the Armenian genocide of 1915. 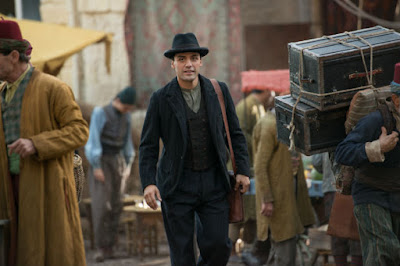 When the Ottoman Empire was falling apart in the early part of the 20th Century and the first shots of World War I were being fired, 1.5 million Armenians were murdered by the Turkish army. Unlike the industrialized genocide of Nazi Germany, the murder of Turkey's Armenian population took place in less systematic fashion. In part, the Ottoman mass murders were prompted by deep-rooted Ottoman suspicions that the Armenians represented a rebellious social element. An already teetering empire would be further imperiled. And, of course, the Armenians were Christians in a predominantly Muslim culture.

There were other reasons for Ottoman antipathy toward its Armenian citizens, but few of them -- beyond the bigotry of Turks -- are effectively dramatized in the historically sketchy new movie, The Promise.

Although the Armenian genocide makes its way into much of the movie, the filmmakers try (understandably, I suppose) to find a hook on which to hang a drama with mainstream aspirations.

In pursuit of said hook, they concoct a romantic triangle between an Armenian who aspires to become a doctor (Oscar Isaac), a sophisticated Armenian woman who has lived in Paris (Charlotte Le Bon) and an American journalist (Christian Bale) trying to chronicle the murderous assault on the empire's Armenians.

Working in a conventional style that favors handsome imagery, director Terry George (Hotel Rwanda) introduces audiences to a horrific chapter of history about which many know little. But George fails to fuse the movie's many elements into an emotionally shattering whole.

Tellingly, the movie's most moving element arrives during the end credits when we see photos of young Armenians who perished at the hands of Turks. A title card that enumerates the period's genocidal toll leaves us to contemplate the unthinkable in ways the movie too often fails to provide.

The story begins in a small village in southern Turkey, where Turks and Armenians live in harmony, according to Mikael Boghosian (Isaac), the village apothecary. Mikael aspires to be a doctor. To achieve his goal, he agrees to marry and use his fiancee's dowry to pay tuition in Constantinople, where he'll pursue his medical studies. Mikael vows to return to his bride-to-be (Angela Sarafyan) as soon as he completes his studies.

In cosmopolitan Constantinople, Mikael meets Le Bon's Anna. Immediately, he's smitten, thus putting his marriage promise in jeopardy. Anna, an Armenian who has lived abroad, already is involved with Chris Myers (Bale), a hard-hitting reporter who tends to lose his temper when confronted with Turkish prejudice and self-satisfaction. He becomes pretty involved in the stories he covers.

The romance forces George to bring the lovers together before driving them apart, a necessity that also prompts George to divide his attentions between Mikael's story -- forced labor to support the war effort and subsequent escape -- and Chris's attempts to document genocidal atrocities.

Mikael's perilous journey eventually returns him to his home village, where his mother (Shohreh Aghdashloo) insists that he fulfill his promise, marry his fiancee, hide in a cabin in the woods and "make babies." Chris's journalistic probing lands him in a Turkish prison.

Unfortunately, many developments in the movie are telegraphed or put to the service of the emotional agenda dictated by the love story and by what may have been a desire to tame a period of indigestible political chaos for the screen.

There's value in The Promise for those who know nothing about the fate of the Armenians, but a movie such as this should have left one devastated and inconsolable. Perhaps it could have had George been able to shed the kind of italicized filmmaking that, at one point, introduces actor James Cromwell (as Henry Morgenthau, US ambassador to the Ottoman Empire) to deliver an on-the-nose bit of dialogue in opposition to injustice.

Isaac's brooding, thoughtful demeanor is supposed to play against a bearded Bale's singular commitment to getting the story, but George and his co-screenwriter Robin Swicord haven't been able to satisfy two masters: the need to depict the horrors of genocide and the desire to tell a heartbreaking love story.

So we wind up with a movie that often misses its mark, and suffers all the more for it by having had the courage to tackle such an important subject.