A highly absurd helping of action

In Skyscraper, Dwayne Johnson races to save his wife and children. At times, the movie proves preposterously amusing. 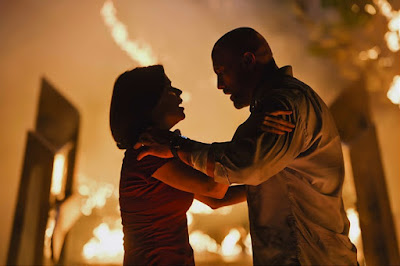 Say this, Dwayne Johnson doesn't need a special costume to be a superhero. It seems as if the guy's saving someone every other week at the movies. That's an exaggeration, of course, but Johnson has become one of Hollywood's heavy lifters, a prolific action star who has yet to wear out his welcome.

Credit Skyscraper with carrying Johnson to new heights of preposterousness with lots of digitally created action. The movie's cornucopia of set pieces includes a much-written-about scene in which Johnson's character leaps a reported 40 feet from a giant construction crane to The Pearl, the Hong Kong skyscraper in which much of the movie takes place. He’s supposed to be 100 stories in the air — or some such.

But, hey, who's looking for realism? With movies such as Skyscraper, we're not expected to believe that such a feat could be accomplished. We're supposed to enjoy it precisely because we know it's impossible.

Johnson's Will Sawyer makes many such daring leaps because he has taken a job evaluating security at the world's tallest skyscraper, a marvel of a building that's three times taller than the Empire State Building.

The Pearl makes for an inviting setting, the pride of its billionaire creator (Chin Han). The building features a design that includes lots of curved surfaces and an indoor garden with a waterfall that plunges from lofty heights. The building is topped by what looks like a giant tennis ball, but really houses a series of electronic projectors that, of course, figure in the movie's hall-of-mirrors finale.

The screenplay contrives to put Sawyer's family in harm's way. His wife (Neve Campbell) and twins (a boy and a girl) are trapped in the building after it has been set on fire by villains who are trying to bully Han's character into turning over a computer chip.

Why do they want it? Does it matter?

Director Rawson Marshall Thurber's main job has less to do with creating complex motivations for his characters than with churning out vertiginous set pieces and, then, moving the characters from one to the next.

Johnson doesn't have much dialogue, but he sweats and grunts impressively as his character engages in activities that might challenge Tom Cruise's Mission Impossible character.

To complicate matters, Will has a prosthetic leg as a result of injuries sustained in the movie's prologue, which takes place when he was still an FBI agent. And, yes, the leg will be put to use before the action concludes.

Thurber, who also wrote the screenplay, doesn't create a consistent enough atmosphere to support the movie's ridiculously conceived action. He shifts tones, adds unnecessary gunplay and becomes repetitious as he races through a harebrained screenplay: Its signature distinction: an emphasis on the many uses of duct tape.

The fun of the movie hinges on watching Johnson carry out all this over-the-top action as if he really believed in its importance. At one point, Will uses his amazing strength to hold two severed parts of the building in place while his wife walks across a plank to save their asthmatic son.

Despite such super-human displays, Johnson isn't quite strong enough to hold the movie together, but if you're willing to check all of your critical faculties at the door, Skyscraper might qualify as one of the summer's guiltier pleasures.