When hope has all but vanished

Andrea Riseborough plays the title character in Nancy, a movie set on a landscape in which love has all but died. 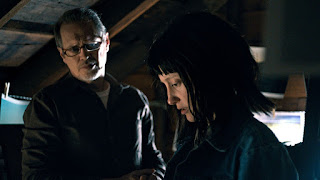 In Nancy, a debut feature from director Christina Choe, all the characters have been made miserable by loss or neglect. Nancy -- the movie's title character -- lives with her demanding mother (Ann Dowd) in a rundown house in a nameless town. Mom's dying of Parkinson's and relies on Nancy to tend to her every need -- small and big acts that Mom accepts without ever showing a trace of gratitude.

Given the roles that Dowd typically plays, her appearance instantly triggers an expectation of bad things to come. Dowd's portrayal of Aunt Lydia in Handmaid's Tale stands as a brutal study of tyrannical conformity. In the recent Hereditary, she played a seemingly compassionate, grief-stricken woman, but -- with Dowd -- we've learned not to trust the surface.

Dowd isn't the main character in Nancy, but she helps to set the movie's bleak mood.

Andrea Riseborough portrays Nancy, a character who makes no effort to be likable or even comprehensible. Nancy invents stories about herself. At one point, she feigns a pregnancy as a means of consoling a grieving man (John Leguizamo) whose infant daughter died a while back.

Leguizamo's character asked to meet Nancy after reading a blog post she wrote. He has no ulterior motives; he only wants to talk to someone who might give him hope, someone with enough faith in life to bring a newborn into it. Even if well-intended at first, Nancy's deception becomes an act of cruelty.

When her mother dies of a stroke, Nancy sees an opening. She attempts to insinuate herself into the lives of a couple (J. Smith-Cameron and Steven Buscemi) who long ago lost a daughter to kidnappers. Having seen the couple discussing their lives in a recent TV interview, Nancy decides to contact them, claiming to be that long lost child.

What unfolds is an intimate exercise in acceptance and delusion, an exploration of grief and diminished hope conducted by a trio of highly skilled actors.

As a professor of literature, Smith-Cameron wants to believe in Nancy. Buscemi's Leo, a psychologist by trade, proves more skeptical, but never aggressively so. It's a pleasure to see Buscemi give a subdued performance as a man who has known pain but has struggled to keep his balance.

Leo orders a DNA test to determine whether Nancy's story is true. But the meat on this movie's bone has little to do with the results of that test. Choe's doesn't aim for pin-point specificity; she doesn't even bother to develop an entirely credible plot. We don't so much watch Nancy as we sink into the bleak lives of its severely damaged characters.

Choe doesn't spell things out; she gives us plenty of room to discover. As a result, Nancy turns out to be a small but troubling movie about the way hope can flicker in lives that have all but abandoned it. Is that flicker a saving grace or the cruelest of delusions? Could it possibly be both?