A troubled father and his daughter 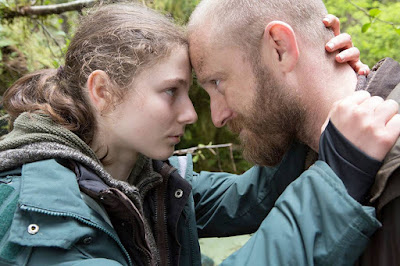 We're not exactly sure why, but Will, one of the main characters in Leave No Trace, can't live with people.

Instead of giving us answers to the movie’s central question, director Debra Granik provides us with plenty of clues. Will was in the military. He sometimes jolts awake because of horrific dreams. He has withdrawn from society, living in the woods around Portland, Ore.

But what distinguishes Will from other walled-off loners with wart-time PTSD is that he has brought his teenage daughter on his journey of isolation. We imagine that this daughter -- her name is Tom -- was quite young when Will returned from whatever combat zone did so much damage to his spirit. Somewhere along the line, Tom's mother died -- or so we assume. Since then Will and Tom have been trying to live off the grid.

Granik, who co-wrote the screenplay with Anne Rosellini, delivers her first movie since 2010's Winter's Bone, a mournful yet deeply compassionate look at a father who loves his daughter but seems to have given up on any future for himself.

As the movie progresses, Will's daughter begins to encounter the outside world. When father and daughter are busted for living on public lands, they're turned over to social workers who try to do right by them. After some initial interrogation, father and daughter are placed in a home on the property of a Christmas tree farmer. The farmer doesn't ask much of them, although he seems to expect them to attend Sunday services.

At those services, we see a group of devotional dancers that struck me was one of the movie's only strained moments, but the dancers and the folks who run the service are so damn nice that the movie seems to be daring us to dismiss them as caricatures.

In this part of the film, Tom also meets a farm kid who's raising rabbits. Slowly and in the unforced way of the movie, she begins to see the benefits of interacting with others. The thing is, she likes people and perhaps even recognizes her need for them. Living in the woods may offer Will a measure of freedom, but will just as surely imprison Tom in a life of isolation.

And maybe even Will knows that; he's homeschooled Tom well enough for a social worker to tell her that she's way ahead of where she should be academically.

Normally, I'd have mentioned the actors earlier, but Leave No Trace is about its characters, and I spent more time thinking about them than I did about the actors who played them. And isn't that in itself a tribute to the movie's cast.

When I tell you that Ben Foster, an actor of scary intensity, plays Tom, you'll instantly realize that Granik isn't about to allow the material to get sentimental.

Foster's Will isn't a heroic champion of natural living. It's not that he chooses to reject society; it's that he's become constitutionally unable to be part of it. And we judge from the movie's title that whatever damage Will did during whatever war he fought, he has resolved not to destroy anything else. He doesn't so much crave the solitude of the forest as he hungers for invisibility.

The relationship between Will and Tom could have turned ugly or melodramatic. It never does. There's no questioning the love that unites them.

But, as Tom -- played with reserve, devotion and an awakening sense of self by Thomasin Harcourt McKenzie -- says to her father at one point, "The same thing that's wrong with you isn't wrong with me."

Granik has a strong feel for nature; she makes the forest a character, a place that can offer shelter and solace, but one where people don't necessarily belong.

She also likes to portray ordinary people, folks who are scraping by but still have a generous spirit. At one point, Will and Tom wind up in staying in a trailer at the home of a beekeeper (Dale Dickey) who seems to have found a convincing middle way; she can live with nature without turning her back on people.

At this point, the film relaxes enough for the locals to gather for guitar playing and singing, something that normally would have made my eyes roll but which Granik presents as an organically expressed part of the lives she observes.

Leave No Trace is a rarity, a movie that runs its finger over a deep vein of pain without offering palliatives or bromides. That feels unblinkered and right.